Roman remnants near the Cathedral of San Rufino greet you even steps away from the church:  a paved Roman road was unearthed during restoration projects following the 1997 earthquake.

This section of  Roman road, probably lead from one of the Roman city gates,  enclosed now in a private home just below Assisi’s main piazza…..

…up to a temple to the Bona Mater, probably on site of the 12th-century Cattedrale di San Rufino according to many archaeologists.

…and Roman blocks form the base of the cathedral, possibly the foundations of the temple:

On the wall near the entrance door farthest to the right, a 1st-c A.D. relief in local limestone depicts a Roman in short tunic leading a horse:

The bellower of the cathedral is built over a 1st-A.D. Roman cistern which you’ll see on the left as you enter:

Roman wells and cisterns in Assisi indicate the abundance of water in Roman Asisium – and in fact, in the Museo Diocesano di San Rufino in the 11th-century crypt of the church, a Roman well (2nd-century A.D.) – 35 meters deep –  is flanked by the columns of the crypt: 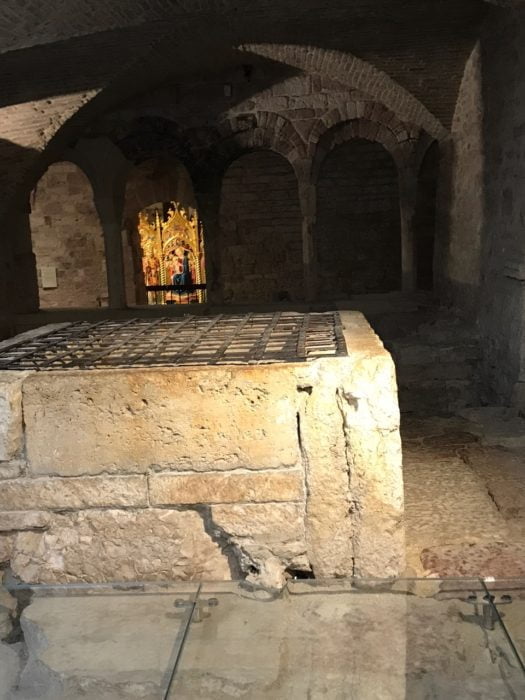 Probably the most significant Roman artifact in the Museo, housed in the 12th-century crypt, is the 4th-c A.D. sarcophagus in which the mortal remains of San Rufino,  first bishop and patron saint of Assisi  – for St. Francis is one of the patron saints of all of Italy!  – were placed in the 8th century. At that time, this tomb was inside a parva basilica (small church) in an area called “Bona Mater,” perhaps site of a temple to the goddess of fecundity and fertility.

The Madonna del Latte image of the Virgin nursing the Christ Child on the central door of the cathedral symbolizes the Church nourishing the Christians .   When I asked Federica (working in Museo Diocesano of San Rufino if she saw links to that image and the Roman temple. “Certamente!” she immediately affirmed, adding “that image is a  ‘christianizing’ of an ancient pagan cult to the goddesss of fecundity and fertility.”

In the early 11th-century, Bishop Ugo mandated the building of a larger basilica, termed “basilica ugoniana.”  Restored in 2001, the  11th-century crypt of this church now houses the 3rd-century A.D. Roman marble of Carrara sarcophagus. The columns of this crypt are medieval but some are perhaps topped with Roman capitals:

The front of the sarcophagus is  sculpted with the myth of Selene and Endimione,  the love between the goddess of the moon and a sleeping young shepherd…. – and  on the back an image of the deceased San Rufino was painted in the 15th-century:

San Rufino had been martryed in the 3rd-century A.D. and finally drowned in the Chiascio River below Assisi after a series of grisly tortures.  In another subterranean section of the museo – under the Canonico (Bishop’s palace),  San Rufino’s martyrdom scenes appear on the base of a late 15th-century bellissimo triptych of Niccolo’ Alunni (called “il Liberatore”).

The triptych is one of many treasures in this subterranean Museo Diocesano which were once in the cathedral above.  This triptych had graced the altar of the cathedral transformed in the 16th-century when its Romanesque splendor was canceled.

Bishop Rufino is depicted in a blessing gesture next to a saintly deacon to the left of the Virgin and Child.  To the right, St. John the Evangelist – writing his Gospel – is flanked by another holy deacon:

Scenes of the martyrdom of San Rufino are in the predella at the base of the triptych, reproduced here below:

Also to note in that predella, the image of the city of Assisi painted from Santa Maria degli Angeli on the plain below Assisi, the city enclosed within its medieval and Roman walls and the Basilica di San Francesco (on the left in the image) before the alterations commissioned by Pope Sixtus IV (mid-15th-century).  La Rocca and la Rocchicciola fortresses surmount hilltops and the Cathedral of San Rufino, Basilica di Santa Chiara – as well as many a medieval family tower – are easily discernible:

The Virgin reigns in this Museo, in other images too, such as the 14th-century Madonna in the style of Duccio, Sienese Master, the 15th-century elegantly-dressed Madonna holding the Christ Child dressed in transparent garments  and a Virgin with Child flanked by two angels in a framed niche in the  15th-century painting in tempera on a wood panel:

A stolen image of the Virgin, Dormitio Vergine,  Venetian masterpiece of the 14th-century and part of an Assisi private collection, has returned home thanks to the work of the  investigative branch of the national police, NCTPA, Nucleo Carabinieri Tutela Patrimonio Artistico (Nucleus of Carabinieri Guarding the Artistic Patrimony).

The image depicts the mournful Apostles gathered around the Virgin in solemn prayer just after her death:

This note has mentioned simply a few of the masterpieces in Assisi’s Museo Diocesano e Cripta di San Rufino: an “underground” museum but not to be under-estimated.

Read about – and see! – the Roman forum museum underneath Assisi’s 1st-c. B.C. Temple to Minerva

Read about Roman splendor in a private home in Assisi

Click here to read about – and see! – Roman treasures all over Assisi