Keep your eyes open as you walk through Spello so as to take in the hints of the splendor of the Roman colony, Hispellum – and they’re even in the churches.

In Santa Maria Maggiore, the holy water font at the entryway is a splendid marble Roman funerary monument:

As you exit the church, look to your right and you’ll note two Roman columns at the base of the bell tower, remnants possibly of the Roman temple to Vesta and Juno, for the Santa Maria Maggiore was built on the foundations of the temple.  The temple faced the Roman road winding through Hispellum and Spello’s single main road traces the route of the Roman one.

If you turn left exiting Santa Maria Maggiore, you’ll note a building constructed of the pink limestone quarried on Mount Subasio which backdrops Spello as well as Assisi.  Do go through the white limestone arch into the courtyard of the building, now residence of the pastor of the church but in the Middle Ages, the palazzo priorale (palace of the priors, i.e., those governing the town).

A pair of travertine Roman columns topped with Corinthian capitals stand solemnly nearby, set into the outer wall of Santa Maria Maggiore, next door:

Not far from Santa Maria Maggiore – and just behind the nearby Sant’Andrea church – you’ll see the foundations of the forum of Hispellum:  the ruins now border the town parking lot. 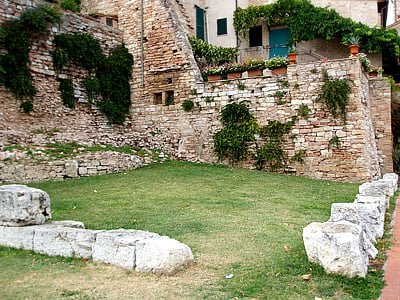 And a bit farther up the street, drop into the 13th-c. Church of San Lorenzo.  An elegant Baroque 17th-c gilded wooden baldacchino with twisting columns – a copy of Bernini’s bronze baldacchino over the altar of St.Peter’s in the Vatican –  rises over the altar.

And Roman traces grace this Spello church as well: the altar under the elegant baldacchino rests on a the remnant of a robust travertine Roman column:

That Roman splendor: take time to find it in Spello.