Flags and banners are integral to the celebration of Calendimaggio in Assisi and not just those representing the two districts, La  Magnifica Parte di Sopra  and  La nobilissima Parte de Sopra….

..but all those colorful banners  flung, twirled, hurled upwards  in an astounding show of acrobatic splendor by Assisi’s sbandieratori: 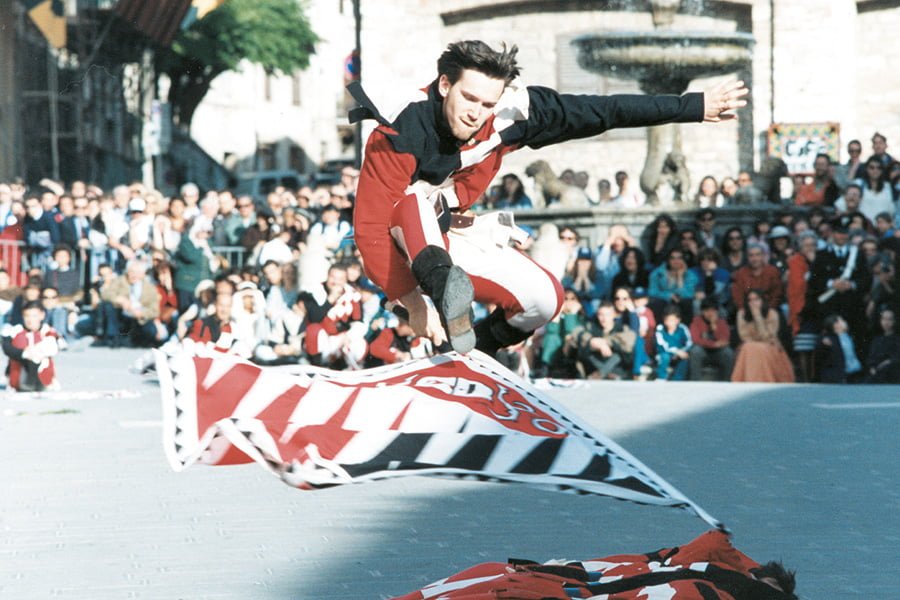 The sbandieratori  (literally, “wavers of flags”), date from the 14th century when they were “signalers” in wartime.  Their presence among the troops was a sign of citizens’ pride and demonstrated keen warfare tactics, a point of reference during battle.  Their various launches of he flags indicated the propitious moments for attacks, the movements of the enemy, and  salient moments of battle.  All banner-waving followed precise codes understood by those receiving the messages..
The sbandieratori were among the most skilled in the militia and their task was to defend the flags to the point of death.  They had to be faithful and discreet, also versed in various languages  so as to communicate with the enemy. If captured, the sbanieratori  could reveal nothing – even in the face of death or torture.
Nowadays, the sbandieratori of Calendimaggio are not signaling warfare messages but simply their passione and love for Assisi’s magnificent May festival.