An Umbria Olive Harvest, Past and Present 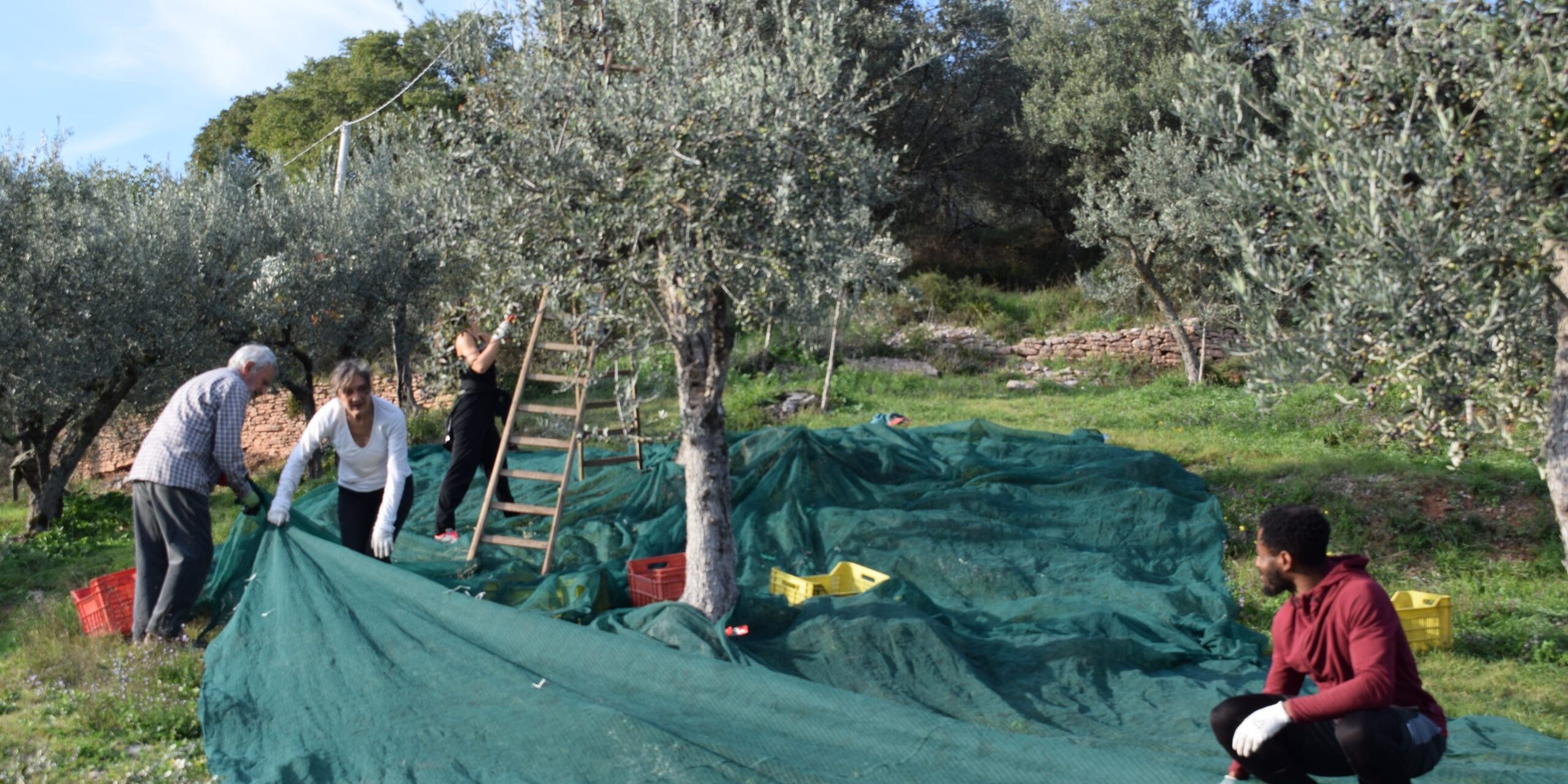 When we first harvested olives here in the Umbrian countryside in an icy December, 1976, the picking was all done by hand.  Basket around the waist, you’d reach up the olive branch and strip down the olives towards the basket. (A few leaves might slide along, too,  but they’d be separated out at the mill).

I remember the first time we picked olives.  Bundled up, we headed to Assisi on Pino’s motorcycle, a Gilera 150 to an olive grove just outside of Assisi where we’d agreed to work the harvest for the owner. It was so cold that we made a small fire in the grove for warming our hands, now and then.

I have only this photo of those December olive-picking days: 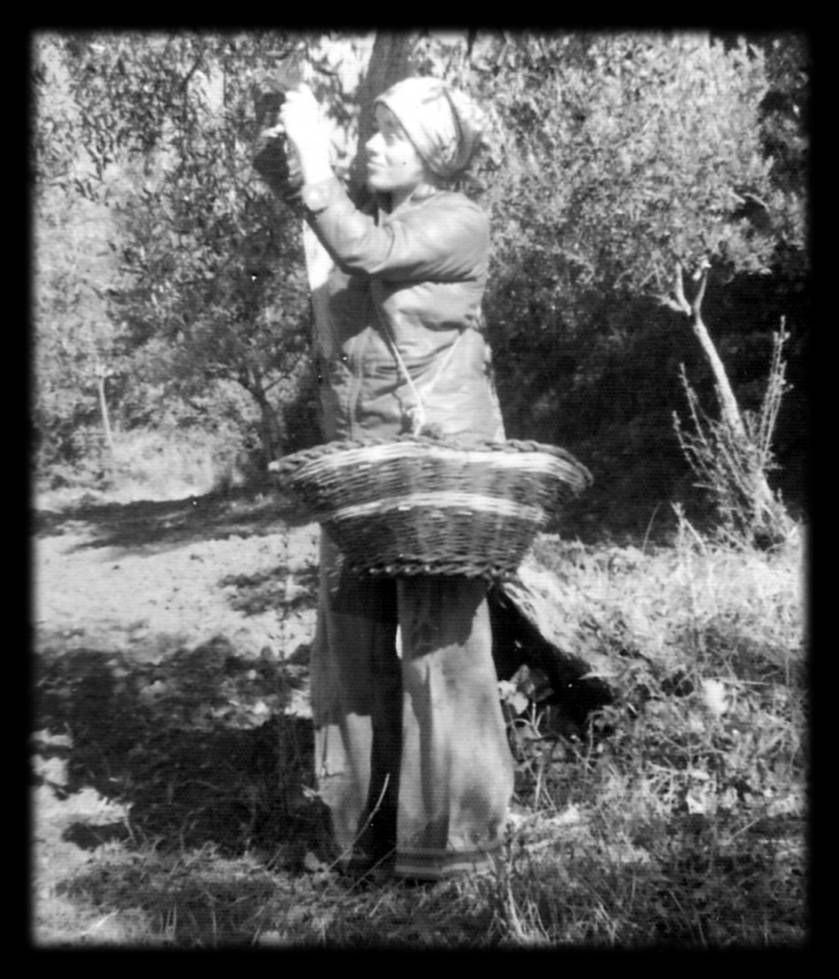 As I look at the photo, I note that willow basket tied around my shoulder. We still have a similar one (made by rural friends) – and I sometimes use it for picking… 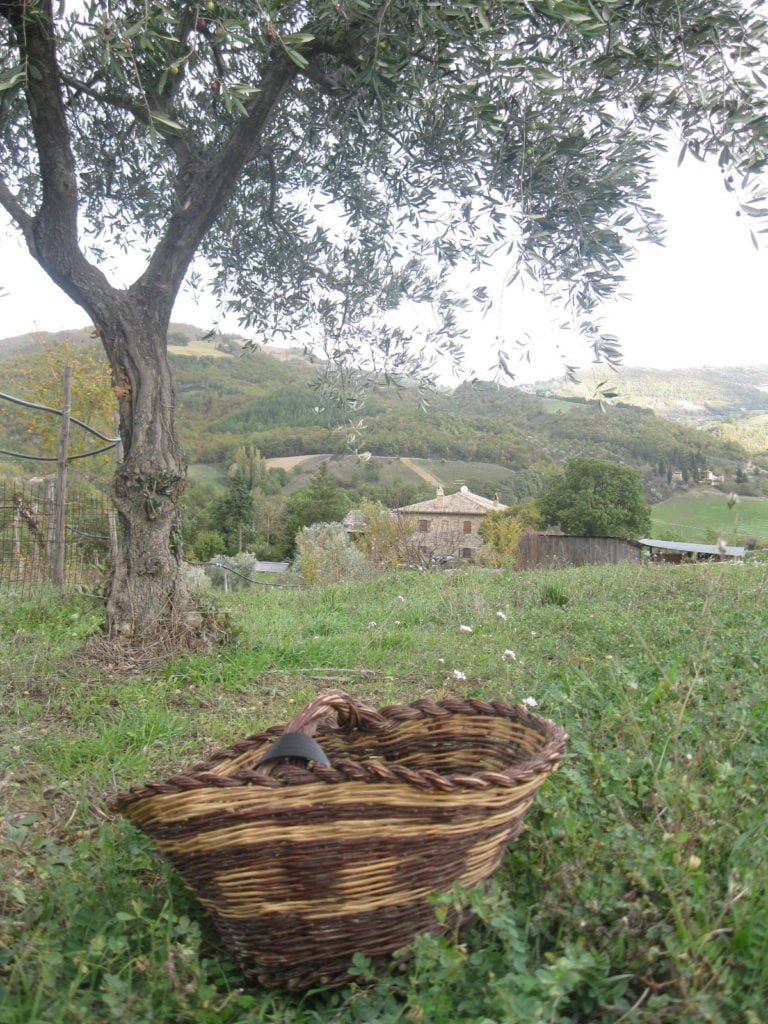 …the basket dangling in front of me, tied with a belt that loops over my shoulder: 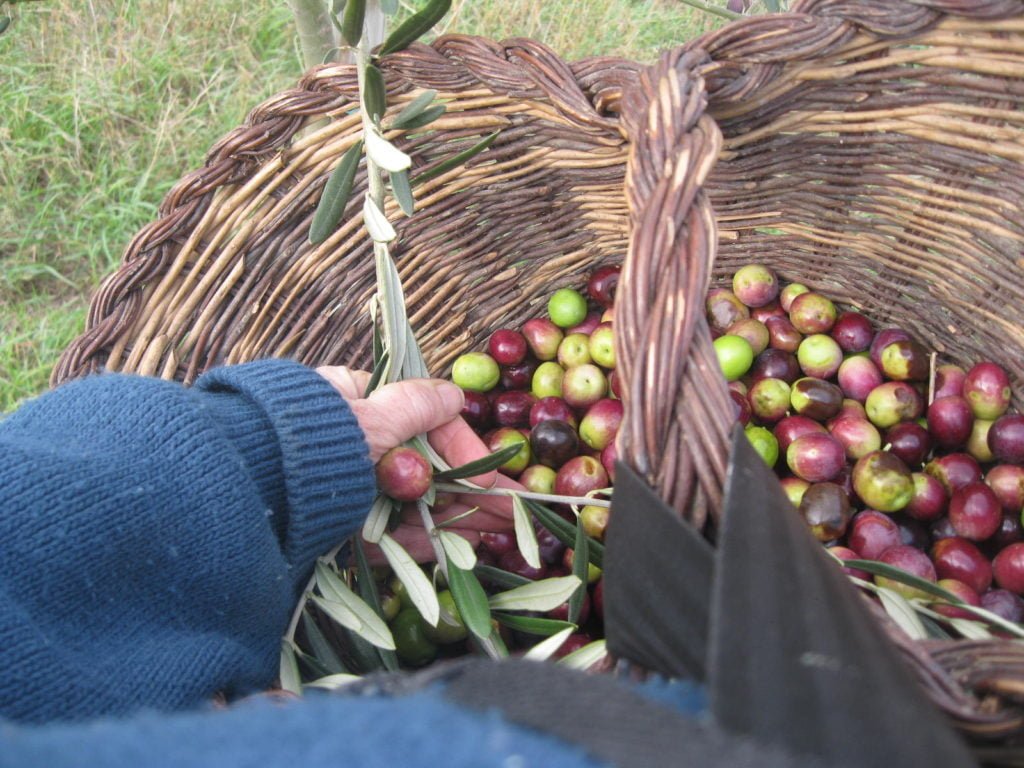 Mostly, though, nowadays, we wear plastic buckets tied around our necks when picking by hand: 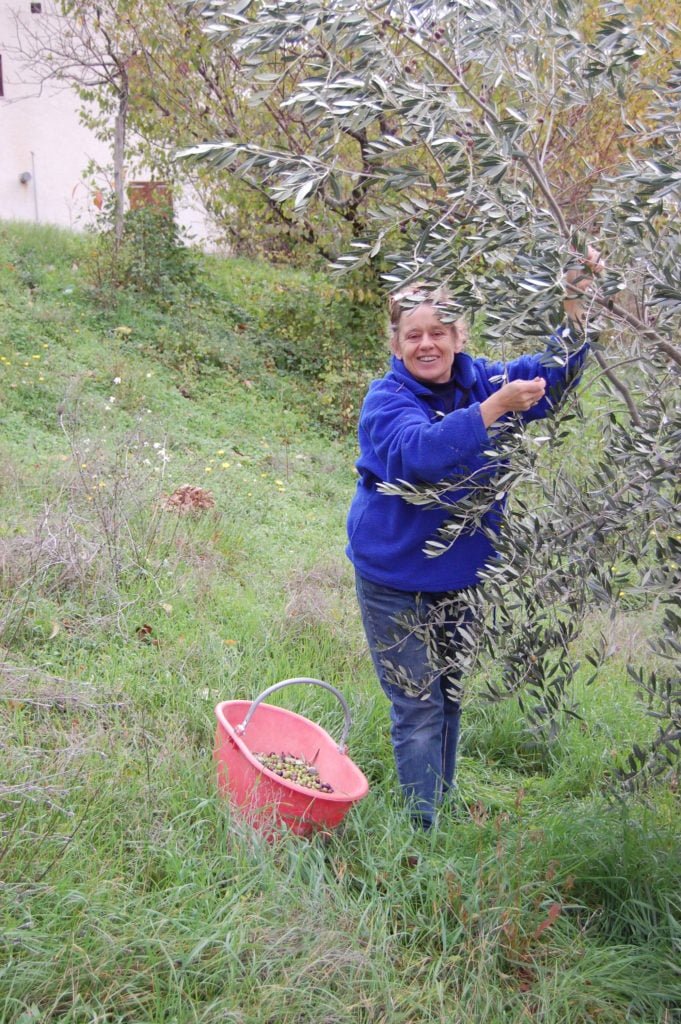 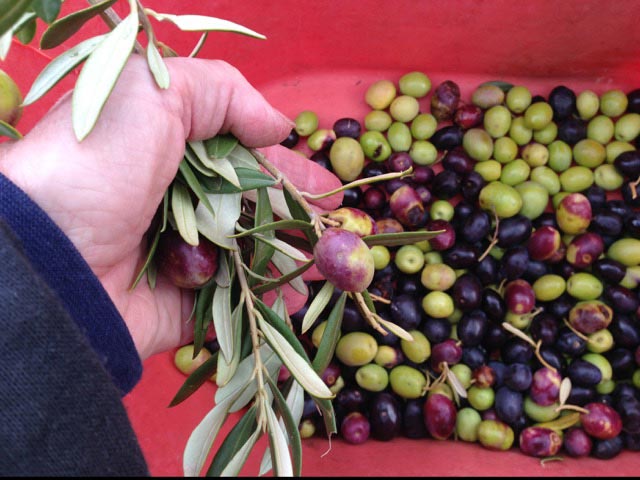 But those baskets once used – and sometimes, still used – all over Italy,  are artisanal treasures: 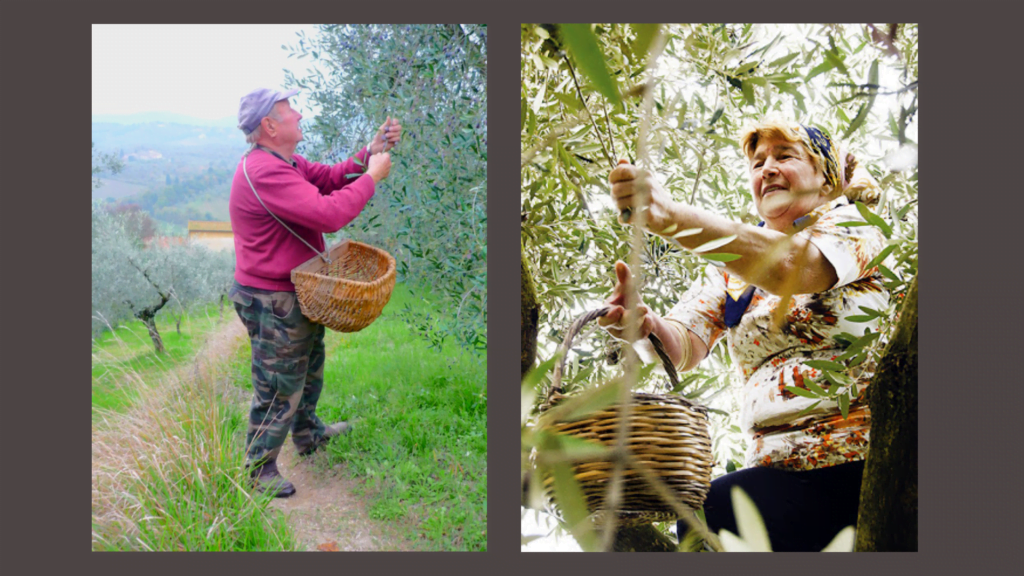 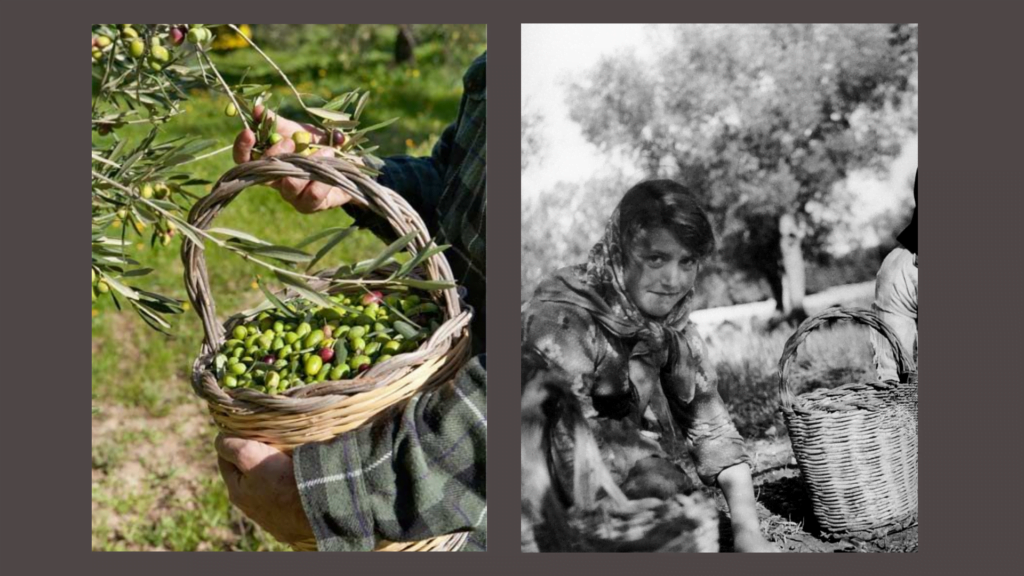 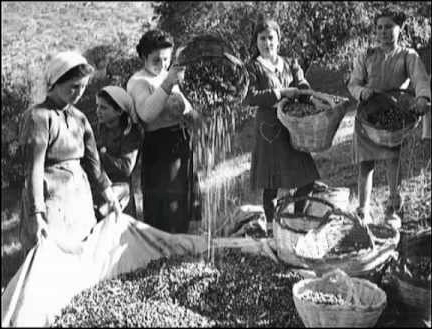 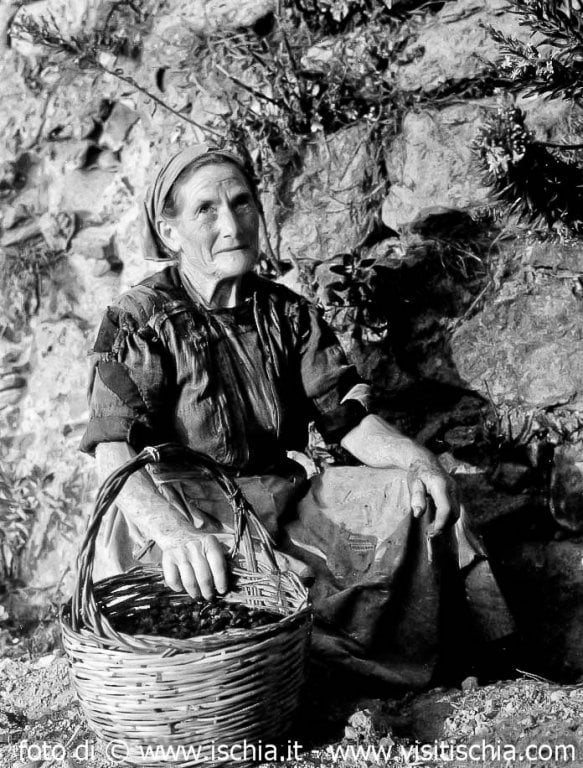 The baskets for harvests – of grapes and other fruits as well as olives – were made by farmers-also-artisans like dear Pasquale on the island of Ustica (Sicily) – who taught his basket-making craft to his nephew and grandson – and  made baskets nearly until his death (at age 100): 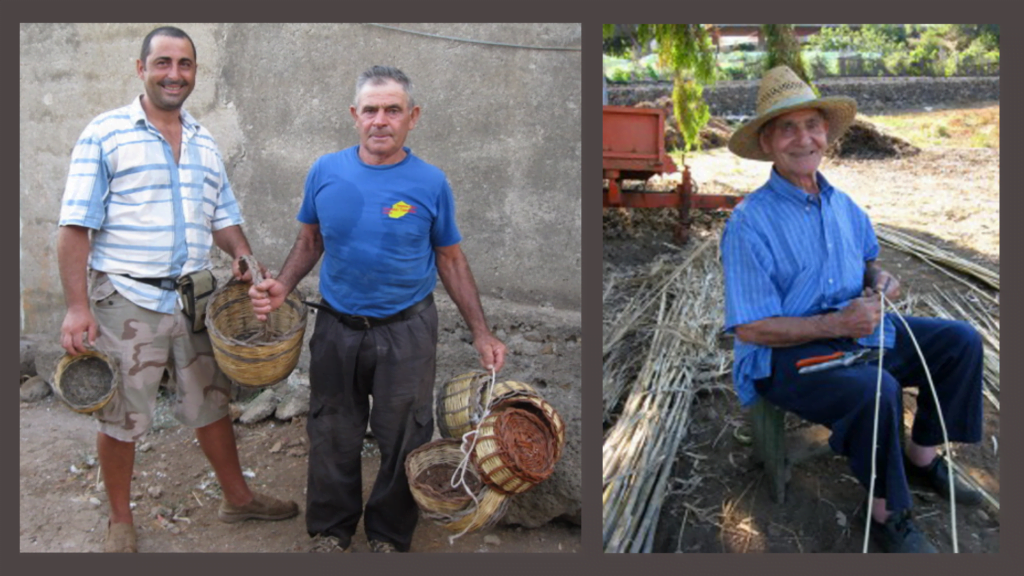 Basket-weaving is a true artisanal craft as here in our bella Italia, those working the land are often also skilled artisans, creating  works of art out of willow branches and cane: 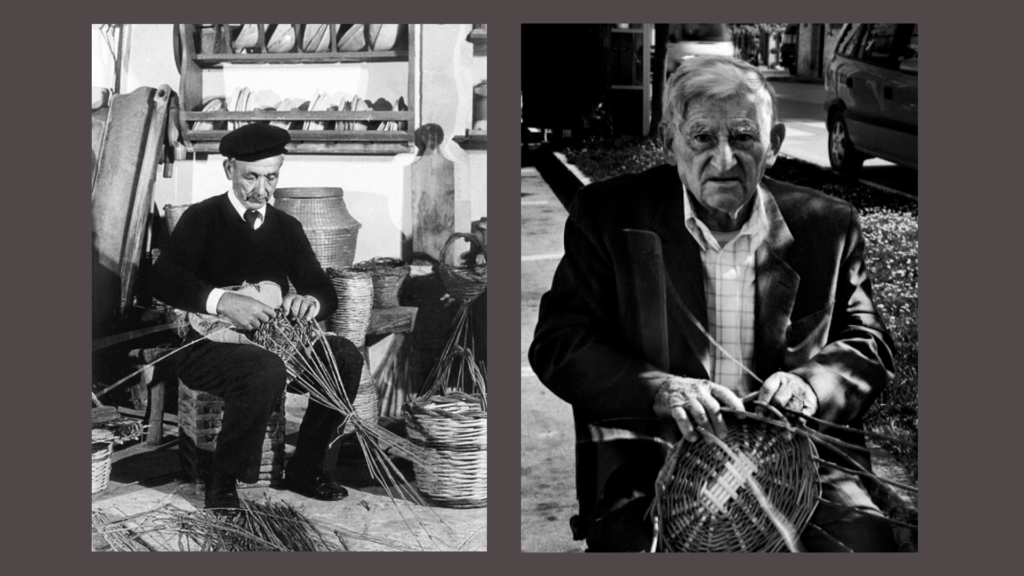 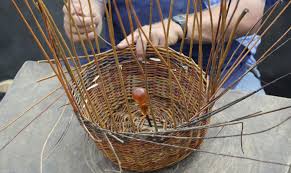 In the Museo del Vino in Torgiano, a display shows a willow basket and willow branches nearby for the baskets used in Umbria in the grape harvests as well as the olive harvests :

Baskets – and buckets – are used less often these days as the olive harvest has become more mechanized, with rakes used to pull the olive off the trees …. 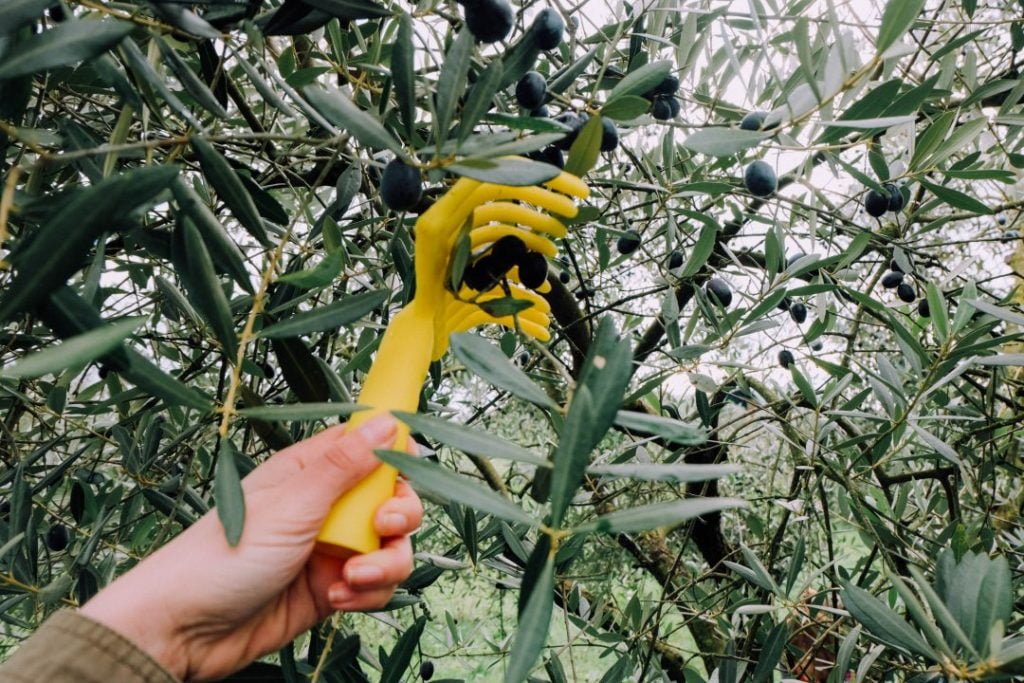 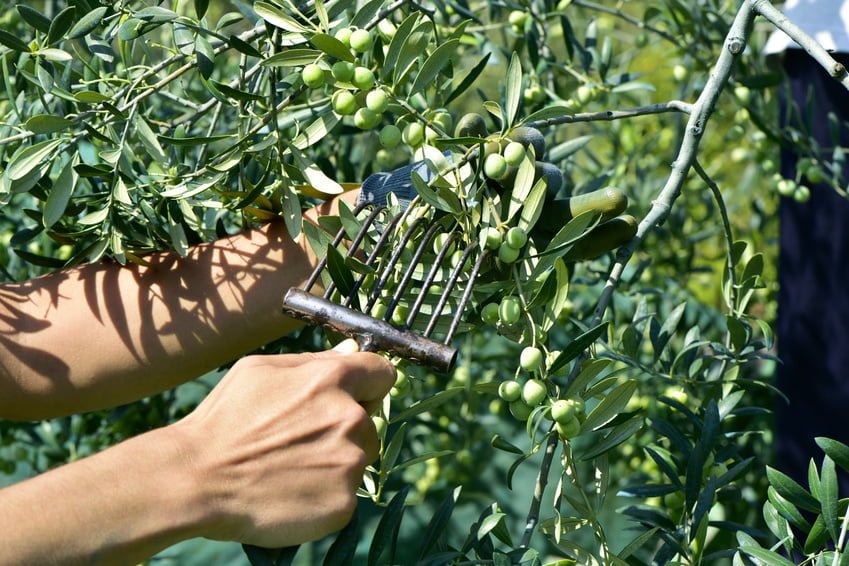 …and onto nylon nets spread out around the trees. 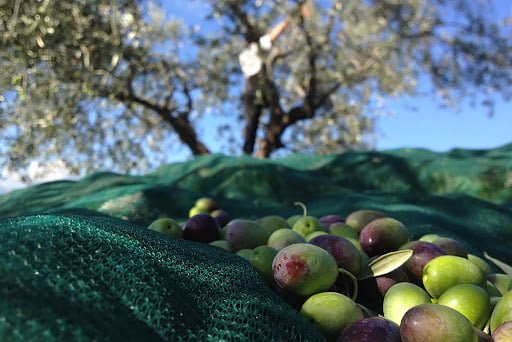 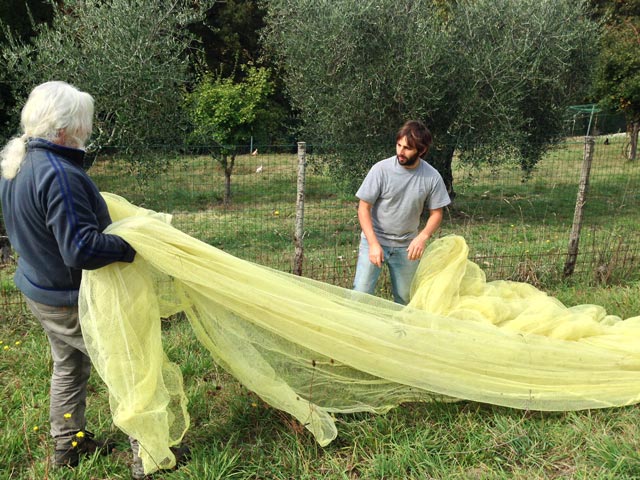 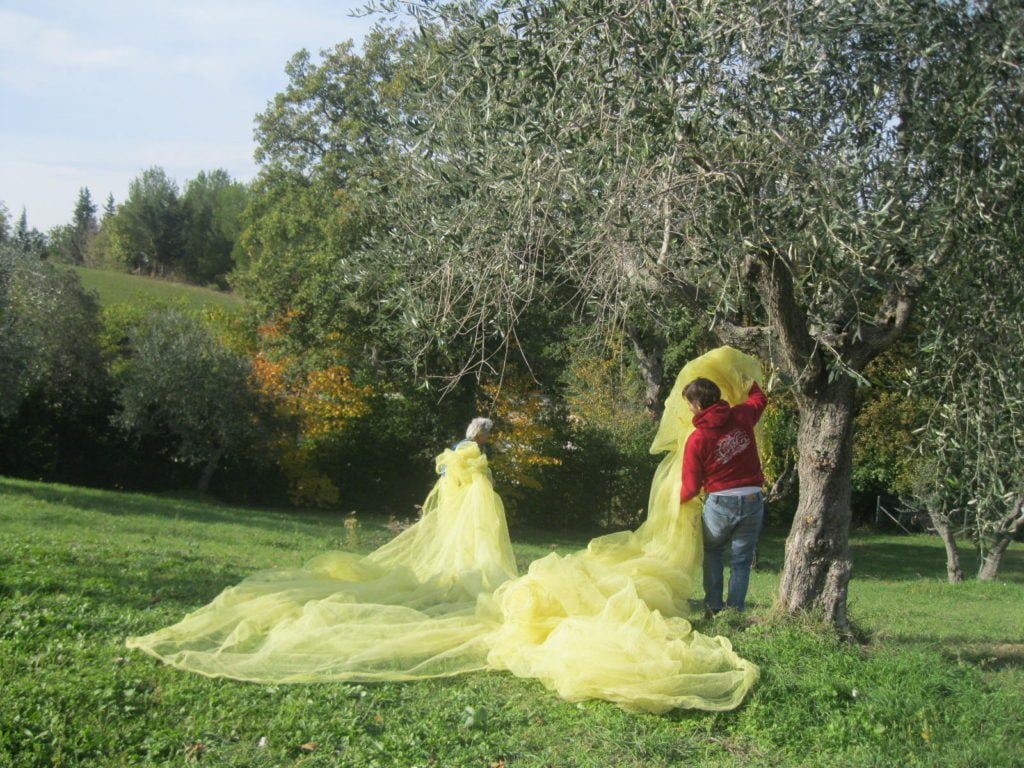 In the late 1970’s when we worked the land here near our Assisi farmhouse,  nets were not yet used (their use started about twenty years ago) and in any case, our rural neighbors – most of them mezzadri or tenant farmers – certainly could not have afforded them.

We did not have them either for our olive harvests years ago: the ground olives were simply picked up after all the olives on the tree had been culled: 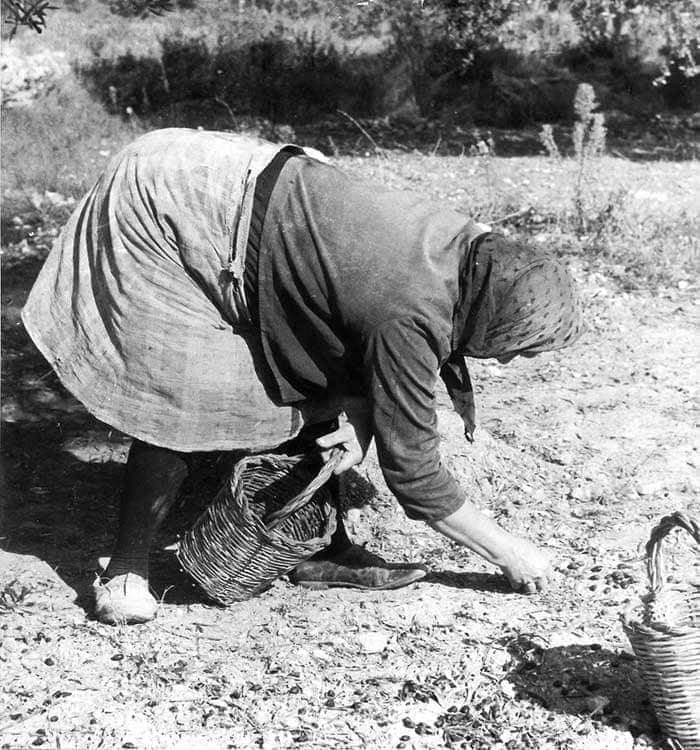 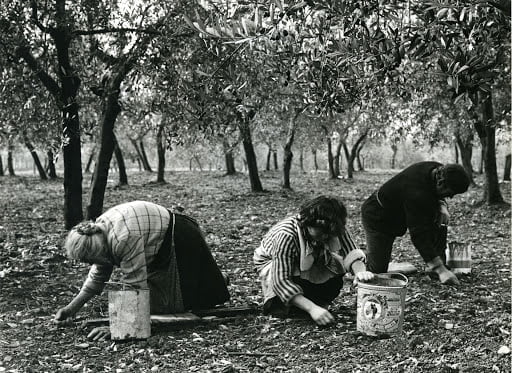 Every olive was precious.

In the post-war years of hardship and poverty, women and children worked together on the aciname. From the word, acino or “seed,” l’aciname was the picking up of the olives left under trees after harvesting of olives in the groves of estates. They’d then salt-cure those treasured olives for eating. 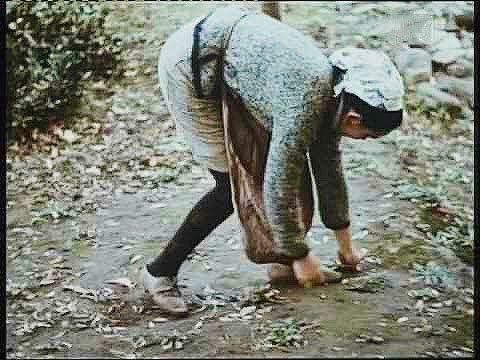 Nowadays, the nets catch the olives falling from the trees when the olive-bearing branches are combed with hand-held small rastrelli (rakes), those harvesting climbing ladders to comb the highest branches. 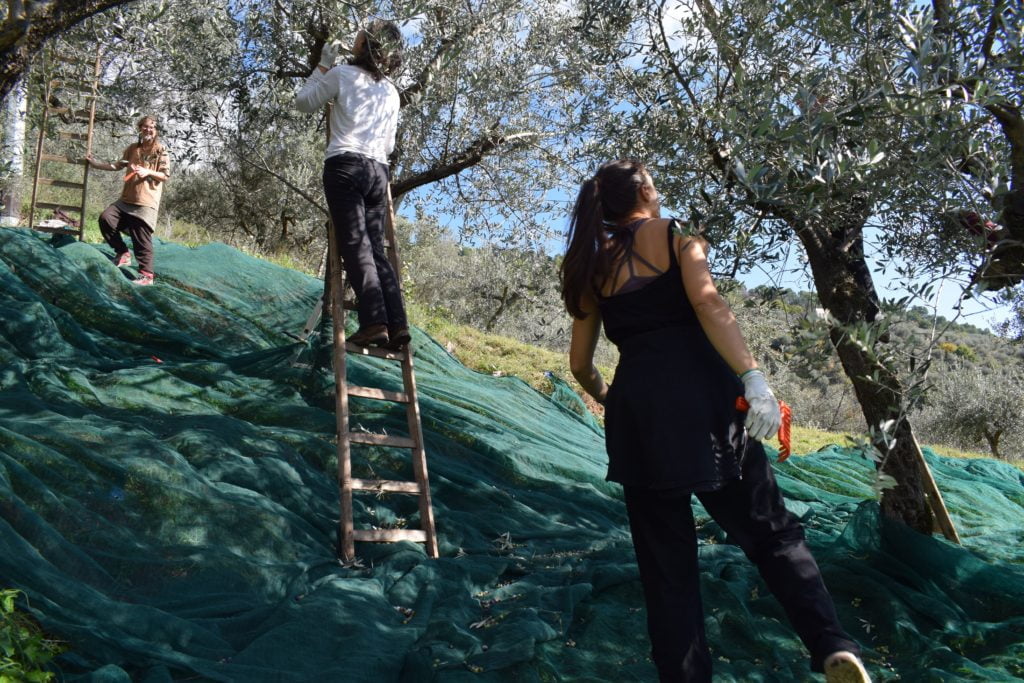 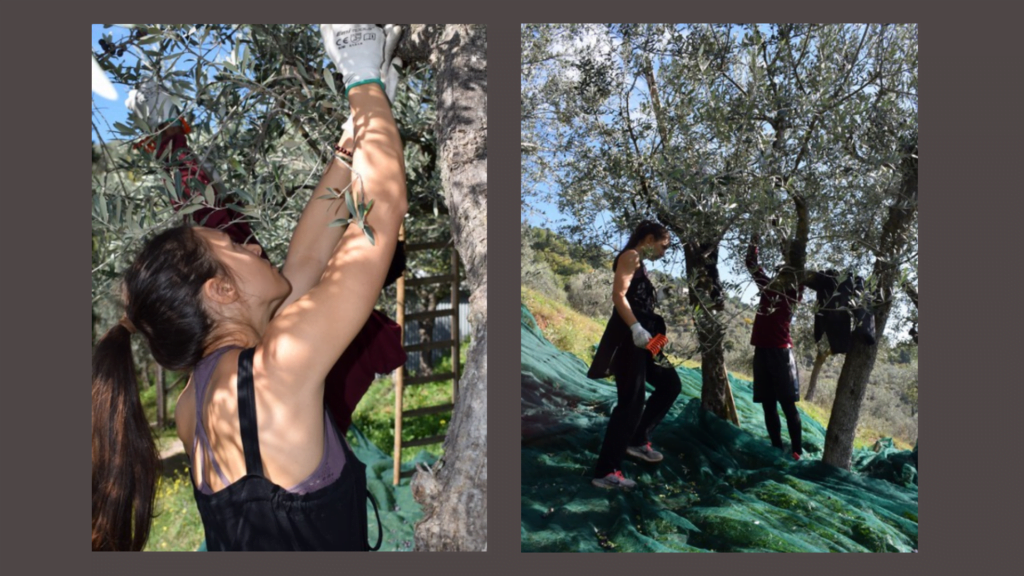 Many who harvest olives these days now use battery-operated abbatitori (literally, “knock-downers,” i.e., olive-harvesters).  Here you can see the one our son Keegan uses when he helps us on our harvest: 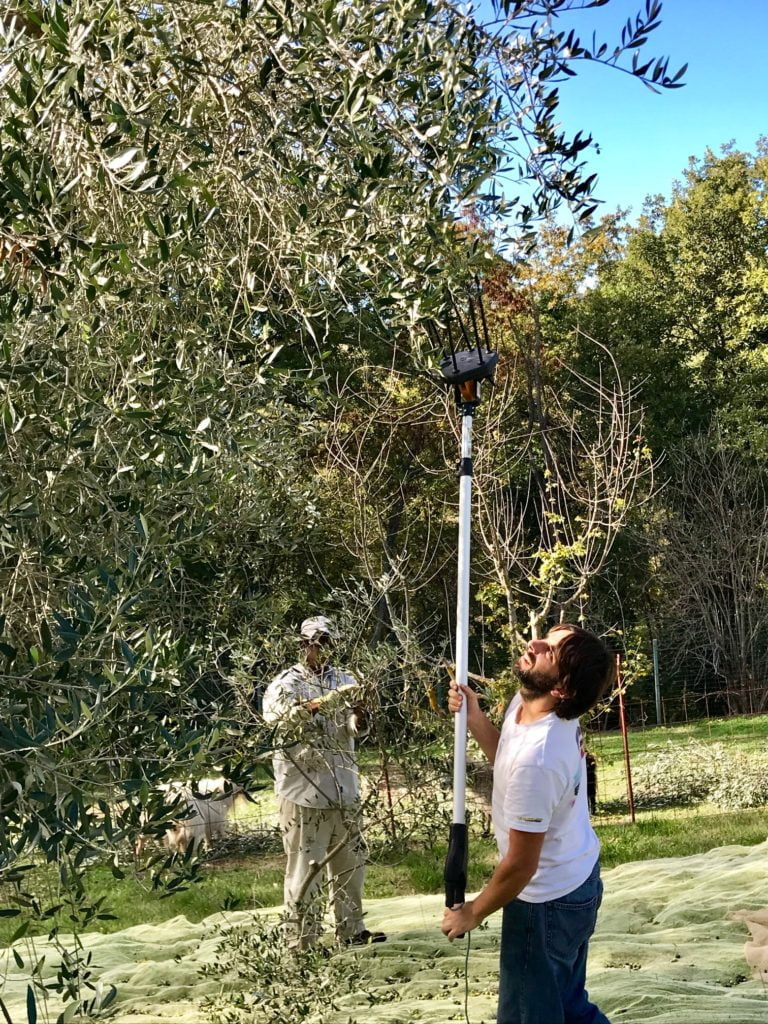 Pino prefers to do the picking “hands-on.”  Literally. 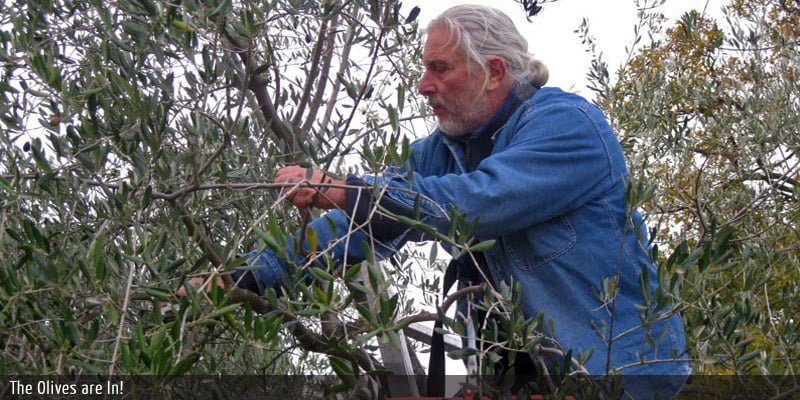 **(Elisabetta, mille grazie for the lead photo – and others – of your family’s harvest in the Spello hills.)

Read about Assisi’s November UNTO festival, celebrating the olive harvest

Read about other ancient treasures of Umbria’s “liquid gold”