There’s usually a life-sized creche scene on the lawn in front of Assisi’s majestic Basilica di San Francesco, right  across the street from the Bar San Francesco of the Angeletti family.

Since 1995, the Angeletti family, in fact, has worked with volunteers to set up the artisanal presepe (creche) with the help of volunteers each Christmastime. 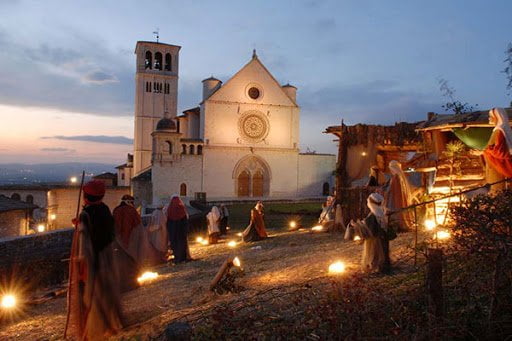 Each year, a new touch is added – and Pino and I would always stop to see the Angeletti crib scene when leaving the Basilica after the traditional mid-December Christmas concert:

The first creche scene is linked to Assisi for in 1223,  San Francesco created a “living manger scene” in a stall in Greccio (small medieval town, just south of Assisi in Latium).

In the fresco cycle  of the Upper Basilica di San Francesco illustrating highlights of the life of Assisi’s beloved San Francesco, the first “living Nativity” scene of Greccio commemorates the event:

This year, there is another creche scene  – and closer to the Basilica, in fact just outside the main door of the Upper Basilica to the right.  The traditional Biblical figures are present – the Holy Family and shepherds – but San Francesco flanks the group – and near him is a nurse.  The Assisi presepe this year pays tribute to the medical personnel in Italy who have worked  – and continue to work – tirelessly during the COVID pandemic:

…and the Francesco figure copies the image of San Francesco frescoed by Cimabue in the late 13th-c. in the Lower Basilica:

Do note the dozing St. Joseph in the Giotto fresco – both on the facade of the  Basilica – and inside the Lower Basilica next time you visit:

Might the “sleeping  Joseph” – a passive figure, not involved in any way at the birth of Christ – serve as a reminder to the viewer in the Middle Ages that he was not the father of God?

Sleeping Joseph figures in the creche scene, as well – oblivious to the Virgin and the Christ Child, as well as to the angel swooping down to announce the Birth to the stunned, frightened shepherds:

Every half-hour from 5 pm to 10 p.m., a “video mapping” of the facade shows the viewer the interior structure as well.  On a recent evening, I walked the lawn before the Basilica and took photos for about a half hour – and here is the start of the “Basilica light show”:

And suddenly, an ancient crane appeared…

….and then scaffolding was going up! At first, I wondered if the scaffolding represented support on the Basilica after the 1997 earthquake….

…but quickly I realized that the projection was of the scaffolding for the building of the Upper Basilica in the mid-13th-c., as soon after, the interior started to come forth;

….and then: just behind the crib scene in front of the Basilica with the  figures of the Holy Family, San Francesco and the COVID-combatting nurse,  the video now projected the fresco close to the door as you exit the Basilica: the Greccio Nativity scene.

Festivities will be limited and more subdued this year but the Nativity’s centuries-old link to Assisi will remain integral to the celebration of Christmas here in Umbria.