In Italy, the patron saints of cities, towns and villages are feted with joy, emotion, grande passione  and splendid celebratory events rooted in local traditions and history.

In Umbria medieval gem, Narni, the narnesi unite in a joyous month-long celebration of their patron saint, San Giovenale, with  events including the re-enactment of medieval markets, banquets, pageants in elegant costumes, concerts and a jousting match.

A young doctor from Carthage (Tunis today), Giovenale headed to Rome – possibly to escape persecution (although little is know about his life) – and after his ordination, was sent to evangelize in the area of Roman Narnia and then was ordained Bishop of Narni.

Tradition tells us that he was a prolific miracle worker, and his thaumaturgy even resulted in the conversion of 2,000 in a single day. He died in  376 A.D. and was buried outside Roman wall of Narnia on the Via Flaminia, Roman consular road of 220 B.C.

His successor, Bishop Maximus built a chapel near his grave, using money donated by 40 sailors who had been saved in a storm by the intercession of the saint. This chapel was probably the Sacello di San Cassio, which was built against the Roman city wall and is englobed into Narni’s Cattedrale di San Giovenale (Cathedral of San Giovenale).

Since the 5th century, his feast has been celebrated on May 3rd, with events starting the night before in Narni’s cathedral.

Flags of Narni’s three terzieri – competing in the jousting match mid-May – dangle from the arches of the Cathedral portico:

Many locals will gather in anticipation for the evening Offerta dei Ceri (“the Offering of the Candles”) celebration in which candles are offered in homage to San Giovenale by the medieval confraternita, the lay brotherhoods, and Narni dignitaries and nobility.

The flags of the three terzieri – Mezule (black and white), Fraporta (blue and red), and Santa Maria (purple and gold) – jut out from the  12th-century capitals flanking the main nave.  (This – and many photos – thanks to Marco Santarelli):

As day gives up to night, the procession of noblemen and confratelli of medieval Narni, parade solemnly into the cathedral bearing lighted candles (ceri)…

…their veiled dame (noblewomen) waiting decorously to one side:

Backdropping the bishop as he leads prayers to the beloved Saint, the canopied baldacchino over the altar adds a Baroque touch to this medieval church – as does the 18th-century silver reliquary to the right of the bishop.

This bust of San Giovenale will be blessed and carried solemnly in the procession the next morning following a celebratory Mass in his cathedral.

San Giovenale’s successor, Bishop Massimo (died 416 A.D.), mandated construction of an oratory on his sepulcher, just outside the Narni Roman wall, which rapidly became a most venerated site. San Giovenale’s body, as well as those of Saints Cassia and Fausta (6th-century Narni bishop  – and his wife), were spirited off to Lucca by a  Lombard duke in the 9th century. The body of San Giovenale was later returned to Narni when Pope John VIII (born in Narni) threatened him with excommunication in the late 9th-century – although Cassio and Fausta were not included in the mandate.

On their return to Narni, the relics of San Giovenale were apparently buried in the rock below a new shrine (now known as the Sacello di Santi Giovanale e Cassio) that was built close to the site of his original grave.

The Sacello di Santi Giovenale e Cassio was incorporated into the 12th-century cathedral in the 15th-century with the addition of a fourth nave (on the right as one enters the cathedral).  Later this small votive chapel will be called simply Sacello di Cassio (“Chapel of Cassio”) in celebration of return of the relics of Cassio and Fausta in the late 17th-century finalmente (and at that time, the relics of San Giovenale were moved to the crypt beneath the main altar).

The wall serving as entrance to the sacello was constructed in the  early 16th century, adopting architectural fragments from an earlier structure.

The inscription on the architrave above the entrance – just above the cosmatesque mosaic motif –  records that Bishop Pietro Gormaz (1499-1515) commissioned the structure. Above this inscription, a 6th-century marble relief depicting two lambs facing a cross is dedicated to San Cassio and his wife Fausta:

…and to the right, a 16th-century Pietà:

If you enter the door below the relief of the lambs, you’ll step into the 17th-century chapel where two 15th-century images of the saints, Giovenale and Cassio, reign over the altar:

To the left of the altar, a small doorway leads you to the original sacello carved into the Roman walls of the town sheltering the  sandstone sarcophagus once holding the body of San Giovenale, 7th-century reliefs sculpted on the front of the tomb:

As you leave the sacello, passing once again through the small chapel, look up as you re-enter the cathedral’s fourth nave. You’ll see a recent (1955) discovery: a 9th-century mosaic of Cristo benedicente (Christ blessing), flanked by 12th-c. frescoes depicting miracles of San Giovenale:

You’ll want to visit San Giovenale’s tomb below the main altar before leaving.

As you head to the main altar, you’ll pass San Giovenale blessing you in the 15th-c tempera on  wood panel painting by Lorenzo di Pietro, known as  “Vecchietta.”

Vecchietta’s wooden statue of Sant’Anthony Abbot is across the nave on the left side of the cathedral, his name and date (1475), inscribed on the base:

Do note as well the elegant Renaissance amboni (pulpits, lecterns) sculpted at the end of the 15th-century by masters perhaps from Tuscany or – as some scholars believe – from Lombardy.

The one on the left bears an image of San Giovanale flanking the Virgin and Child:

…and the one on the right, St. John the Baptist and St. Paul (with upraised sword, symbol of his martyrdom):

San Giovenale’s tomb is in the crypt, just below the altar and his relics were transferred here in the mid- 17th-century, although work on the presbytery and crypt was finished only in the 18th-century.

The narnesi make frequent visits to his tomb…and not just on his feast day. 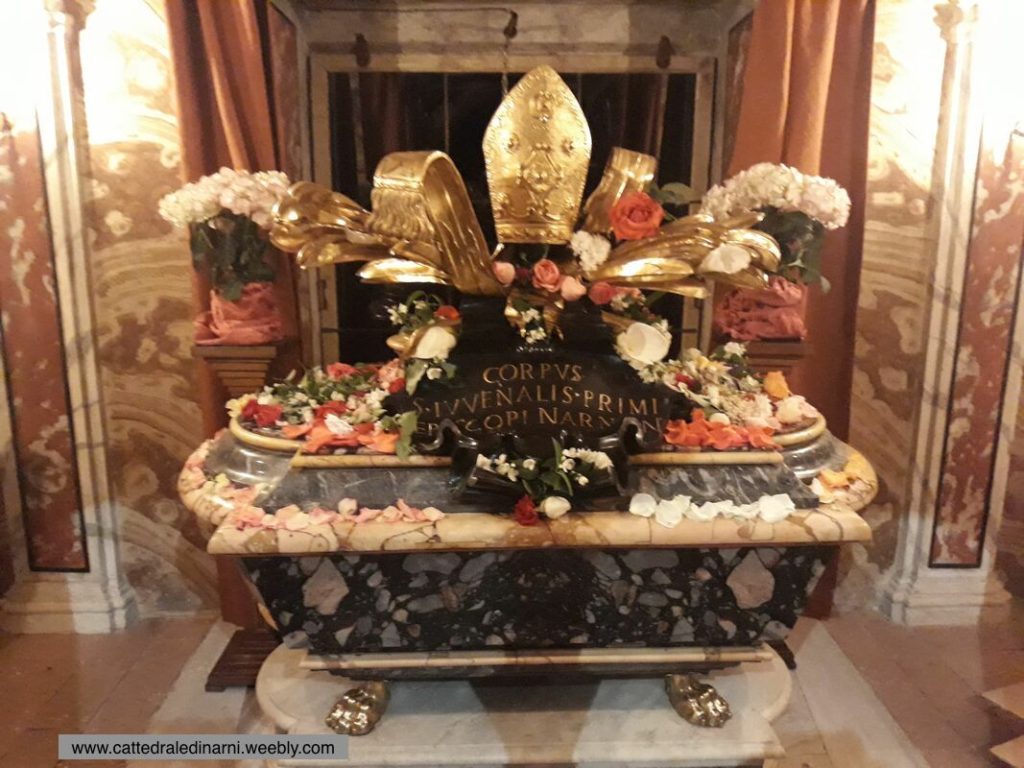 Mille grazie to Marco Santarelli for the lead photo and others.
Thanks also to the Associazione Corsa dell’Anello for the use of some their photos and all the helpful sharing of information.
Click here to read about Narni’s fascinating underground wonders

Read about the Corsa all’Anello and 14th-c stipulation of the celebration, frescoed in Narni’s cathedral