In preparation for my ZOOM presentation May 8, 2021 on Deruta, I needed to see the Museo Regionale della Ceramica, but for now, that museum – like many – is closed due to COVID restrictions.  Thanks to the assistance of a friend, I was able to talk to the Assessore alle Politiche Sociali,  Cristina Canuti, who immediately offered to have the museum opened to me.

I was there on the agreed day – and was most surprised by the carefully-masked “welcoming committee”: Cristina, Daniela (archaeologist working at the museum), another city council member…and the Mayor of Deruta!

They stood before the entrance to this late 19th-century museum, housed in a 14th-century Franciscan convento (monastery), built of local sandstone.:

Sindaco (Mayor) Michele Toniaccini thanked me for coming and for my desire to know more about their town.  He expressed a fervent wish that I would soon be sharing Deruta with visitors from other countries. Before I headed off to tour the museum with Daniela, il Sindaco asked me to stop in at city hall after my museum visit – and then he and the other civic leaders headed off for a city council meeting.

After my too-brief tour with Daniela to view just a few of the Museo treasures (stay tuned for a blog note!),  I headed to the 14th-Palazzo dei Consoli.

I passed the adjacent Chiesa di San Francesco which is, logicamene,  directly linked to the Museo,  once the Franciscan monastery.  You can see the arches of the monastery cloister (now part of the museum) just to the left of the San Francesco belltower in this photo below:

A maiolica crucifix is at the base of the belltower; after all, Deruta is the citta’ della ceramica:

The Church of St. Francis – also built in local sandstone  –  flanks the main square, Piazza dei Consoli,  which opens before you as you leave the church and turn the corner:

A row of three bifori (bi-partite windows) top the pointed Gothic arch of this civic building constructed in sandstone.

Little did I know but I’d soon be on the other side of those bifori.

I headed into the palazzo and up to the second floor to meet the mayor and Cristina in the sala del consiglio. A massive 14th-century (probably) arch rose to a point over the mayor’s seat with a maiolica treasure near the microphone.  An Italian flag stood before the middle bifore, another maiolica artisan work behind it, sitting in a niche under the bi-partite window. A  maiolica pitcher was on the ledge:

With the bright red Deruta banner, bearing the city hall tower and the griffin symbols behind us, Mayor Toniaccini showed me with pride precious maiolica objects…

…and he and I each held a vase for an “official” photo:

Before I left, the Mayor invited me to return soon to City Hall and let me know that he would gladly welcome any visitors as well.  He and Cristina presented me with a two-volume history of Deruta, already a most treasured possession: 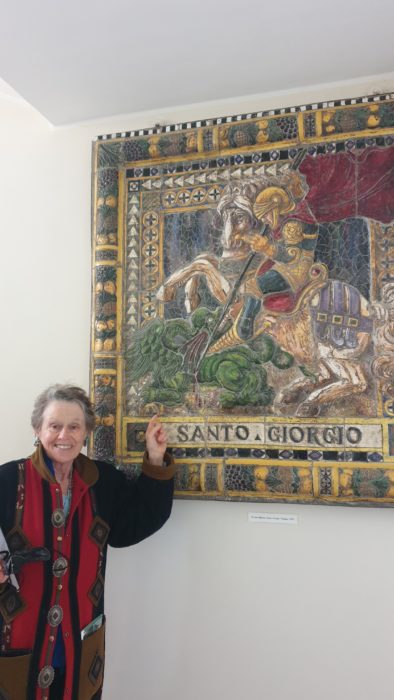 Contemporary maiolica joined ancient masterpieces in a glass case along the stairs:  red stiletto heels, now symbol in Italy of the condemnation of violence against women, stood in a case with prized Renaissance lustre maiolica.

Before leaving, I stopped just inside the atrium near a maiolica panel, depicting the symbols of this town: the medieval belltower near the rearing crowned griffin.

You’ll want to head to Deruta soon to discover the many hidden treasures in Umbria’s citta’ della ceramica.  The derutesi will be awaiting, the mayor included.