Bolsena celebrates in floral splendor the Feast of Corpus Domini, for after all, this feast promulgated in the 13th-century – and also known as “Corpus Christi” – originates with a miracle here in this lakeside gem.   The Festa di Corpo Domini also unites the town to the nearby Umbrian hill town of Orvieto  as you can read here.

Due to COVID restrictions, this year, the bolsenesi floral artists, the infioratori, had to limit their creations to a few masterpieces in front of the 11th-century Basilica di Santa Cristina.

This year, there were just a few floral tapestries carpeting the piazza in front of the Basilica, created by masked infioratori.

Smiling Raffaella showed me her design  for her group’s floral tapestry (mask down as I was photographing from a safe distance):

I stopped by at various moments during their work…

The floral design of Christ holding the Host and a chalice of wine was bordered by other Infiorate images, both above it and below it, with young artists carefully putting snipped and shredded flower petals in place:

One of those three images depicted the Host looped with stalks of wheat, IHS – the Christogram standing for Jesus Christ –  imprinted on the Host with brilliant yellow broom setting off the image.

And thanks to fine Bolsena photographer, Stefano Casasole,  for his photos of the completion of the floral images in front of the Basilica di Santa Cristina…

…and the images of the floral glory:

Flower petal carpets representing each of the four Bolsena rioni (districts)-  as well as one representing the city of Bolsena –  carpeted the piazza just to the left of the Basilica di Santa Cristina, where a Cardinal from Rome would say the Festa di Corpus Domini Mass at 6 pm.

That afternoon I had taken photos of the altar, set up before the main entrance to the Basilica di Santa Caterina….

…..and I took photos of the five floral masterpieces just before the Mass:

The floral tapestry in the foreground in the photo above – that is, the one farthest from the Basilica – was created  by those of the rione Castello – and the castle reigns just above the crucifix on a background of ground pink carnations.

This is the banner of Rione Castello… 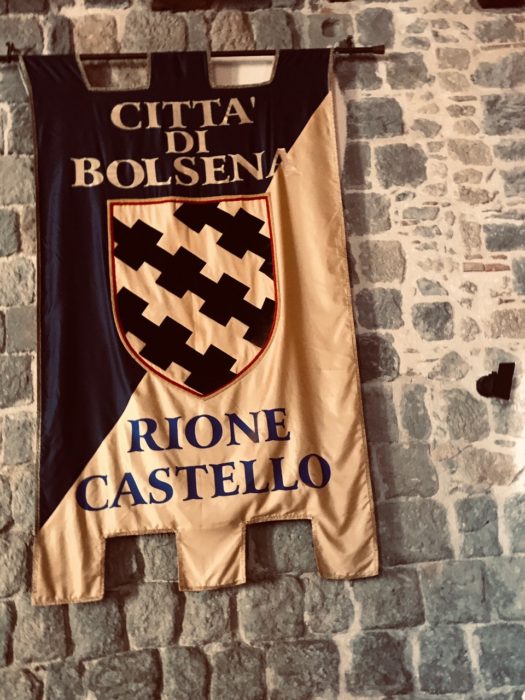 …and here is that imposing castle towering over Bolsena:

And with what passione that castello had been painstakingly re-created in flowers:

And in the afternoon, a young castellano and I had our photo taken near their infiorata:

The Infiorata of the Rione San Giovanni flanked that of Rione Castello  and depicted the Host and a shaft of wheat on a brilliant red floral carpet leading to the city gate of that district, Lake Bolsena visible outside the gate:

..and with what concentration all had teamed together for their creation..

….dedicated to honoring their rione.

And this is the banner of that district:

Next to San Giovanni – and thus in the middle of the four rioni –  a team of infioratori had created the coat-of-arms of the city of Bolsena in flowers – and all the united group happily posed for a photo for me:

Rione Borgo was to the right of the city of Bolsena tapestry:

As a smiling young woman in a blue shirt named Benedetta worked, I asked her in what way the COVID restrictions had changed this festa. She told me, “certamente, we’re missing the full festa but it remains our festival uniting us all.”

Pleased with their efforts, those proud Borgo infioratori immediately shouted “si!” in unison when I asked them for a group photo near their completed masterpiece:

While viewing the floral tapestries in late afternoon, I grinned to see that grimacing face spewing a stream of water…

…recognizing it at once: the image appearing on the fountain in a main piazza of Rione:

…..announcing to all the culmination of the day, the Solemn High Mass in Piazza di Santa Cristina.

Due to COVID regulations, seating was limited and distanced:

The choir – masked and distanced –  was singing inside the church.

Front-row seats near the altar were reserved for the mayors of Orvieto and other nearby towns, each in their tri-colored sash:

Close behind were the masked Bolsena children making their First Communion that day, all in white and the girls crowned with white floral wreaths:

The wall flanking the piazza along the road was lined with masked bolsenesi who had not been able to procure seats…but were determined not to miss this Mass:

The solemn High Mass had always been held in the Basilica and many of the standing elderly I saw at the festival would have been seated.

Hopefully they will be once again next year.

Read about Bolsena’s many enticements

Read about martyr saints and good eating in Bolsena