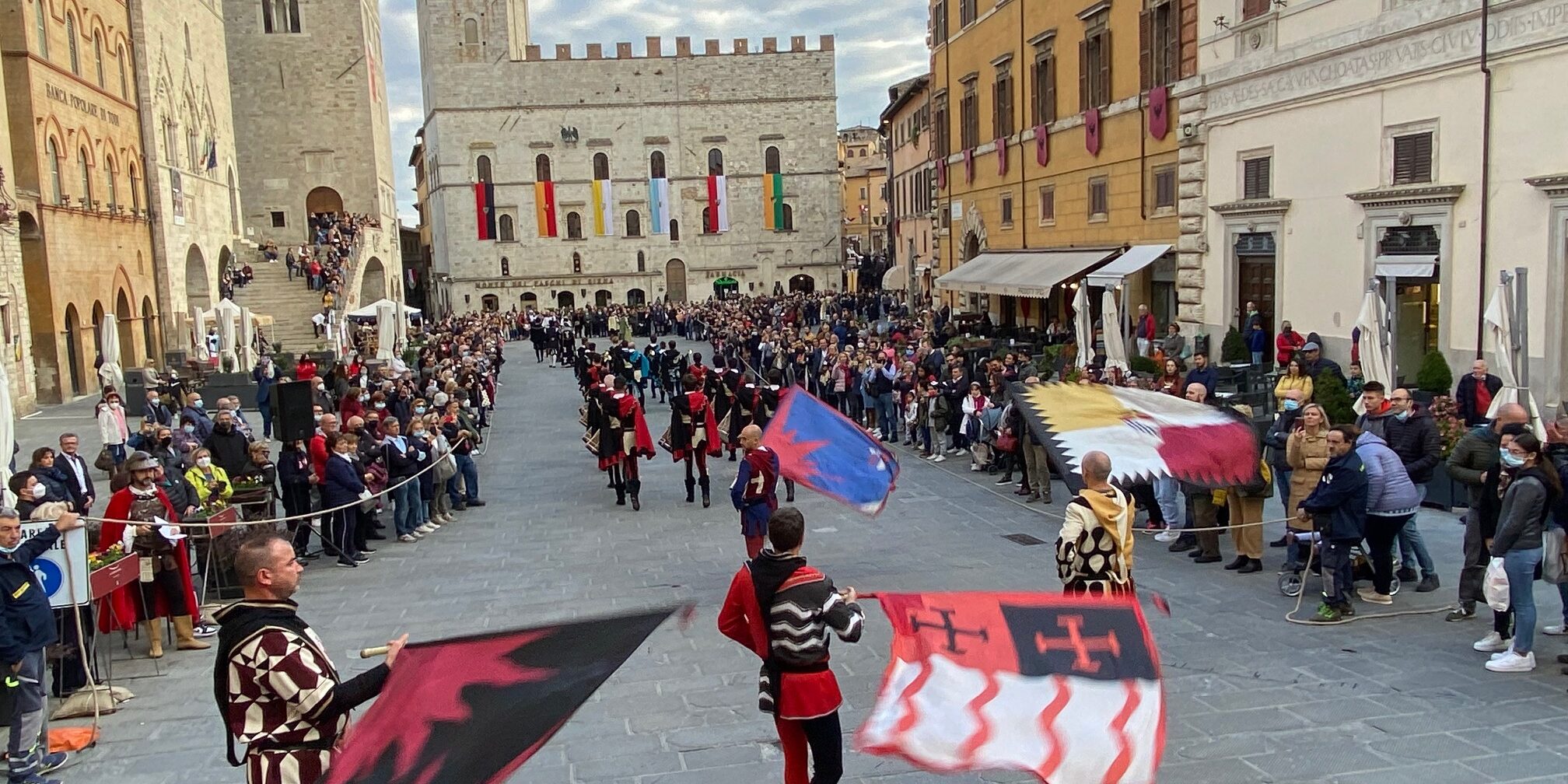 Its “livable” appellation was attached to the town by the Italian press following a 1990 analysis by University of Kentucky professor and environmental architect Richard Levine.

Most tuderti would certainly agree with Levine.  And by the way, the name of the inhabitants of Todi derives from the Etruscan word, “tular” or “tulere” meaning “confine ” or “border.”  Inhabited from the 8th-6th c. B.C. by Italic tribes of pastoral and agricultural peoples, the town became Etruscan and then Roman by the 3rd-century B.C. and as of the 1st-c.B.C., a Roman municipium of great importance, called by the Romans “Tuder.”

The fulcrum of the Roman urban area was today’s Piazza del Popolo, once the forum.

That area is still the fulcrum of tuderte life and local passione reigns there in late October, in celebration of patron saint, San Fortunato:

After the fall of the Roman Empire in the late 5th-century, Todi was invaded by the Goths under Totila in the 6th-century A.D. and a local legend recounts that the saintly bishop, San Fortunato, was able to procure the release of two young noblewomen taken hostage by the  invading Goths. Not much is know about Bishop Fortunato’s life but much is written about his miracles, recorded also by Gregory the Great in the 6th-century.

“..and although San Fortunato is Todi’s patron saint, we had never appropriately celebrated him,” tuderte Carlo Rellini, recently recounted to me when we met in Todi, joined with Elisa, local tuderte guide:

“I was perplexed: why had we not?  In the past,  on his October 14th feast day, we’d just set up a small stand with toys for the children below the steps leading to the Church of San Fortunato,” he added with  a grin. “I remember that stand as we lived right under the belltower of that church until I was 26…”

A member of the archery association of Todi, Arcus Tuder, Carlo and his fifty fellow-archers launched la Disfida di San Fortunato (“The Challenge of San Fortunato”) in 2010 – the year Signor Carlo became president of the association –  as a way to celebrate San Fortunato, the town’s Defensor Civitatis. Elisa is also always very involved in this manifestazione:

I asked Signor Carlo how long he has been an arciere and what drew him to  archery.  “I was nearly thirty… and why? Perhaps because I am a Sagittarius, ” he chuckled.

Over 600 people from five  regions of Italy joined the tuderti in celebrating their patron saint in a week of events including concerts, conferences, medieval dances, falconry exhibitions, archery contests and competitions with medieval weapons,  medieval banner-waving, markets and a medieval banquet.

Pino and I shared in the local passione on the final day of celebrations on a late October Sunday.  As we arrived in Todi, banners of the rioni (neighborhoods of Todi, city sections) were draped from the medieval city porte:

…and the medieval walls, built in the 13th-century on the foundations of the Roman walls of Tuder

We parked  near the Church of Santa Maria della Consolazione, early 16th-century domed splendor attributed by some to Bramante. A medieval milites stood solemnly in front of the church: the perfect prelude to Todi’s medieval festival:

Along with the elderly knight, we took the shuttle bus from Santa Maria della Consolazione up to Todi’s main square…

On the way up, we chatted and I learned that Signor Albano Torasso (age 83) was a mastro d’armi (“a master of weapons”) and had made the medieval weapons for the films of many a famous director including Pupi Avati and Martin Scorsese. Although originally from northern Italy, he had moved to Todi after working there with Avati on his film, “Magnificat” in 1993.

When I asked him about his link to the creation of medieval weapons, he told me, ” It all started when my father sent me as a boy to apprentice to a farrier, telling me ‘Watch and follow the rules. Rules must always be learned in life.'”

He showed me with pride his sword, incised with the inscription “for the glory of the Lord.”

…where we saw our first archers who’d competed with about 180 others in the morning archery contests:

And in a backstreet nearby, women were arcieri chatting together about the morning’s archery contest, il Palio dell’Aquila (the Banner of the Eagle – for the eagle is the symbol of Todi) in which 180 archers had competed.

They were delighted to be photographed – but said only if I joined them:

…as did the Duomo at the other end of the piazza.  There were proud young archers, too:

Falconieri del Re, falconers from Siena, had joined the festivities that morning, every falconer in medieval dress.

Alessandra – from Terni (Umbria) –  had been there, too, dressed as the witch, Morgana, holding proudly on her arm her gufo reale. She was in the Piazza del Popolo as we entered the square, a raptor-breeder colleague with her, Adriano, dressed as Merlin.

Signor Albano, proud mastro d’armi, joined us all for photos before the Duomo:

Groups of archers were nearby and also a stand where bows were sold:

The Disfida di San Fortunato festival included an open market in the vaulted ambience below the pair of  medieval civic buildings united by a grand staircase:

The locals call that vaulted area just behind the stairs, “i Voltoni” (“the giant vaults”):

…and looking out from the market under the vaults, I noted groups of archers talking with passione about their morning contest, perhaps speculating on the possible winners….?

The Sunday events would end with a corteo – a procession –  of all in medieval dress – but prior, prizes were awarded to the archers:

And as all prepared to enter the main square in the corteo, what pride on the faces of those bearing their town’s stendardi (banners):

….and excited children were ready….

The drummers entered the main square, the beat of the drums bringing emotions to a peak. Women in full concentration of the beat were in every drumming group:

Leading the corteo into Piazza del Popolo were personages of the hosting town, Todi, logicamente:

And as we took in the splendor of the medieval corteo, I reflected how every single person passing solemnly before me in dignified posture seemed in fact truly noble.

The proud, noble dignity highlighting that October day in Todi is best described through images.

Here are just a few:

Logicamente, the procession ended at the Church of San Fortunato where the patron saint of Todi is buried:

Mille grazie to Carlo, Elisa and all you tuderti who put your hearts and grande passione into the Disfida di San Fortunato.

You truly gave us the spirit of Todi.

Feedback on Anne Robichaud Guided Tours in Umbria
May 26, 2022