Umbria’s Pasquarelle: Singing in the Epiphany

January can be icy cold in Umbria but a month of warmth, too: the warmth of the locals celebrating January festivals.  An Umbrian winter festival absolutely not to miss is the late-January rural music competition, the Rassegna delle Pasquarelle, in Cascia, in the mountainous southeastern corner of Umbria.

Probably first inhabited by native Italic peoples, present-day Cascia, was part of the Roman municipium of Cursula, ancient city destroyed by an earthquake. Survivors fled to the nearby hillside and rebuilt. The name “Cascia” is first mentioned as an urban entity in the 6th-c A.D. when attacked and devastated by the Byzantines. then the Longobards…and finally by the North African pirates, the  Saracens.
Cascia rises as a free medieval city-state as of the 12th-c. and maximum splendor was reached in the Middle Ages – as for most of the Umbrian hill towns. In the 16th-c.,  Cascia belonged to the Papal States for just 30 years…but succeeded in remaining independent.  This Umbrian mountain town of force and resiliency – just consider all the invasions – was destroyed and rebuilt after earthquakes in 1300 (fortified, too, after reconstruction), 1599 and 1703 – but recently as well: in October, 2016
Cascia’s principal claim to fame is as the home of St. Rita of Cascia, Augustinian saint – and patron saint of “impossible causes” who was born in nearby Roccaporena  at the end of the 14th-c and died there in the mid-15th-c.  After her canonization in 1900, a large shrine was built in the town, which is still an important place of pilgrimage – and the center of the festivities on her feast day, May 22nd.

January warms up in Cascia with the late-January Rassegna delle Pasquarelle, (the review of typical wintertime rural songs) when groups of singers from all over central Italy gather to sing  these rural songs announcing the coming of the Messiah,  the arrival of the Magi and bringing good wishes for health and prosperity in the New Year.  The pasquarelle might also sing good wishes for finding  a young bride! Propitious wishes for fertility of the lands highlight these simple songs of the rural people so inextricably linked to the land.

Traditionally, the pasquarelle were sung house-to-house by ebullient groups of musicians, singers  – joyfully requesting food, and wine, wishing good luck for the coming year, a much-loved tradition of not just Umbria, but areas of Latium, as well as the Marches region and Emilia Romagna, with lyrics always in the dialect of the region. 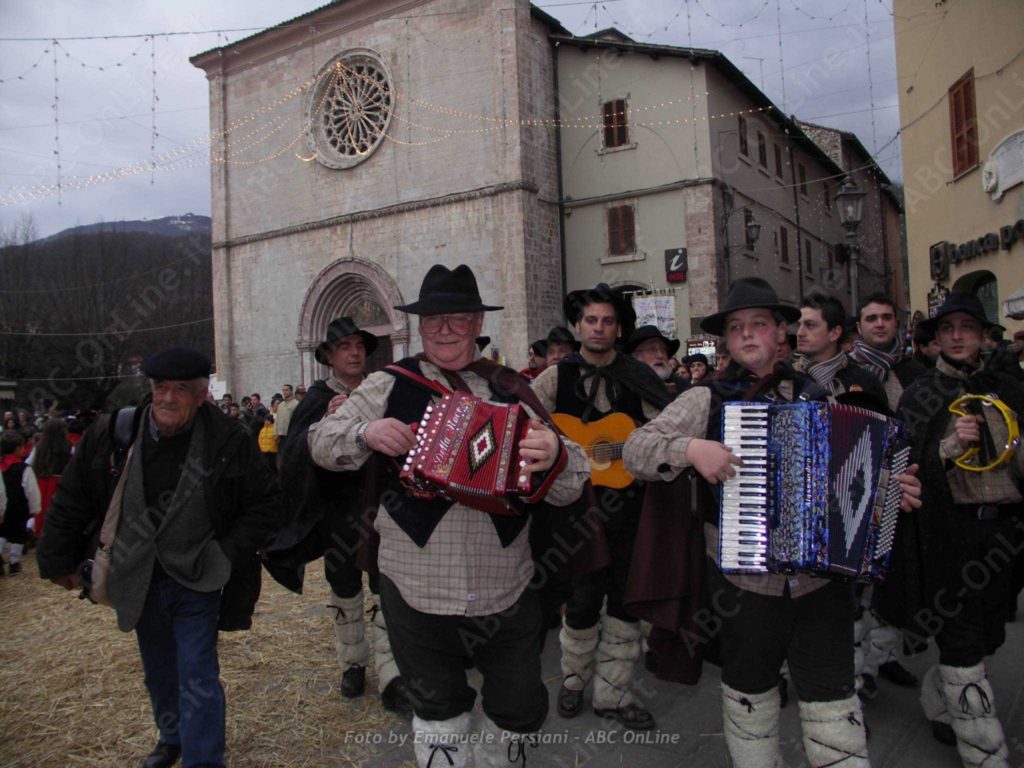 The singers and musicians are called  “pasquaroli,” “pasquellanti,” “pasqualotti,”  and “pasquellari” (in Cascia and other areas of Umbria).
The names all derive from the expression, “Pasqua Epifania” since – in Umbria – and the Marches – important festivities are defined as “Pasqua.” There are three in central Italy: la Pasquetta (Epiphany), la Pasqua di Resurrezione (Easter) e la Pasqua di Pentecoste (Pentecost).
The singers might also be called “befanotti,”or “singers of the Befana,“ that good witch who fills the stockings of Italian children the night before the Epiphany, the day of the arrival of the Magi – often a theme of the pasquarelle songs.

“Befana” derives from the Latin Epiphania which then becomes Pifania, then Bifania, Befania and finally “Befana“.  Epiphaneia (Greek), meaning “manifestation of a divinity,” celebrates the manifesting of Christ to the world, i.e., the Child visited by the Magi.
A legend recounts that an old woman, Befana, spent her days prodigiously cleaning and sweeping. When the Magi came to her door seeking the whereabouts of the Baby Jesus, Befana turned them away, wishing no interruption to her cleaning, but remorse overcame her:  she set out to find the Child with baked goods and gifts and a broom for the Child’s mother. Her efforts were futile and Befana is still following  a bright light in the sky, seeking the Child.
On the eve of the Epiphany, she stops in every house where there is a child and leaves a gift, for although she has been unsuccessful in her search for the Baby Jesus, the Christ Child can be found in each child.  Here in Umbria, the Befana leaves a stocking of sweets for each young one – or fills the stockings if the children in the home hang their own out.
Frequently Befana is part of the group of those singing le pasquarelle, for the arrival of the Magi is often a theme of the songs:

…..and she was there, singing with gusto in Cascia in the year Pino and I took in the delightful Rassegna delle Pasquarelle:

The Magi were there, too:

….and  not only the Magi, but sometimes  the Madonna and St. Joseph joined in – and even the Baby Jesus:

The songs of the pasquellari are handed down generation-to-generation and often the accordionists have learned from fathers or grandfathers….

Tambourines and triangles join in, too, and other folk instruments with delightful onomatopoeic names, such as the triccheballacche, which starred in many Cascia groups::

A  musical instrument originating in southern Italy, the triccheballacche is constructed of 3 wood mallets and the the outside 2 are  hinged to allow percussion with the center mallet.

The “caccavella” –  or for onomatopoeia “putipu”  – is a friction drum (also from southern Italy) composed of three parts: the sound box (an earthenware pan, or a wooden tub or even a large tin can), a film of skin or heavy cloth and a bamboo cane. If animal skins were not available – generally of goat, sheep or rabbit – a thick cloth was used to cover the drum.

Those caccavelle (or putipu) pounded out the rhythms in Cascia:

The music of the pasquarelle – tied to the Epiphany above all – certainly links to the beloved Umbrian saint, Francesco di Assisi.  In 1223, in the hilltown of Greccio in northern Latium the friar from Assisi wished to present a living re-creation of the first Nativity for the people.
Franciscans will diffuse the Nativity as a Christmas tradition and the festival becomes embellished with music and song.
Central Italy’s pasquarelle close the Nativity celebrations with the unity of all age groups joined in joyous age-old rural songs.
Click here to enjoy the pasquarelle.
Click here to see – and hear! – another group
** (…and the full story of  San Francesco’s “living Nativity” is here:   https://www.youtube.com/watch?v=dvx0QQLSwyo&feature=youtu.be )