On the last day of Citta’ della Pieve’s October saffron festival, guided visits through the town focus on “the saffron hues in Renaissance master Perugino’s Citta’ della Pieve masterpieces.” Art intertwined with a culinary celebration: where else but in Italy?

Diane and I missed the guided Perugino tours on our visit to the Giornate della Valorizzazione dello Zafferano (“Saffron Appreciation Days”) but we headed to the oratory to see his magnificent fresco, “Adoration of the Magi” (1504), “finished in just 29 days,” custodian Roberto affirmed proudly. Yes, the saffron shades were there.

Teacher of Raphael, Perugino was born in Citta’ della Pieve and his masterpieces grace the town’s churches. At the end of October, during the saffron festival, his image and his masterpieces are on the saffron packets sold all over the town. Crocus bulbs and crocus plants are for sale, too. The lilac petals of the crocus sativus brighten window displays in a textile shop, bookshop and a toy shop and the gelaterie offer gelato di zafferano (yogurt, also).

Used by Cleopatra to give a golden tint to her skin and by the Greeks as an aphrodisiac, in the Middle Ages, saffron added bright colors to the foods at medieval banquets and became a symbol of wealth. Today in Italy, the regions of Abruzzi, le Marche, Sardinia and Umbria all cultivate saffron with Cascia and Citta’ della Pieve Umbrian saffron areas. About 1000 sq km of crocus plants are needed to produce 500 g of saffron, which adds (appropriately) a “gold yellow” highlight to many dishes of Mediterranean cuisine.

Highlights of Citta’ della Pieve’s week-end saffron festival range from cooking classes in the main piazza (with saffron, the star ingredient, logicamente) to painting classes with saffron to a textile-dyeing workshop, using saffron.

Each day, visitors flock to the mostra/mercato (a “show and sell” market) called “Zafferano…e non solo” (“saffron…and not only!”) to taste (but you might leave with a purchase or two..) local olive oil, honeys, cheeses, gelatins, breads, fruitcakes, sugared almonds, liqueurs, and grappa, all made with saffron. Salamis, wines, farro, the tiny Lake Trasimeno beans (la fagiolina) are there too, the display tables brightly decorated with sprays of violet crocus petals.

Go through the delicately frescoed portico of Palazzo della Corgna nearby to see the displays of fine local embroidery on textiles dyed with saffron. And then it’s time to taste the saffron: join “the locals” in the vaulted Taverna de La Rocca for the banquet of saffron dishes served by enthusiastic young volunteers. Two musicians entertain between courses and groups of friends, families share animated camaraderie over a saffron-studded dinner.

After all, Italians socialize over food and bring alive their town’s traditions through culinary festivals. Here in Umbria, Assisi celebrates its olive oil and both Trevi and Spello, too, fete olive oil while Montefalco celebrates its wines, Perugia, a special January cake, and San Terenziano, its porchetta. A Foligno festival exalts first courses, Vallo di Nera celebrates cheeses and Cascia, roveja beans. In October, Trevi exalts celery, both Gubbio and Citta’ di Castello, their truffles… and saffron stars in Citta’ della Pieve.

Read about a sagra near Perugia starring peperoncino 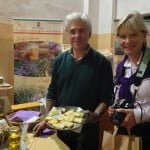