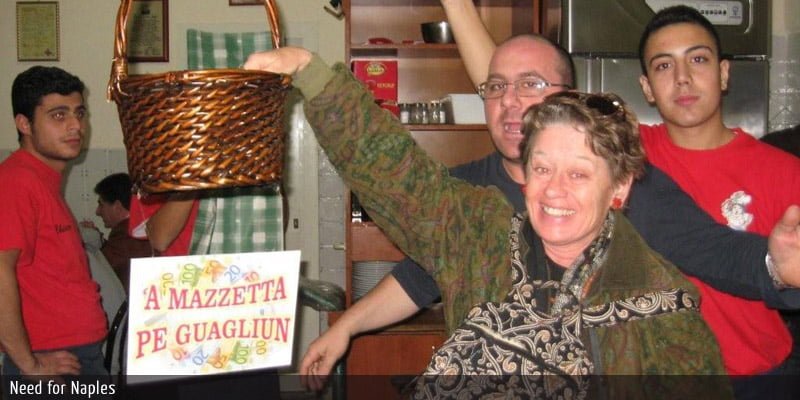 Whenever I have a couple of free days from my tour work here in Umbria,   Naples is often first choice for a  jaunt with my frequent traveling companion, Roman friend, Silvana.    We  hadn’t been to Naples in  two years – and  I was feeling the first symptoms of “Naples withdrawal”.    Not at all alleviated by the film we saw in  Rome last week, coincidentally,  the night before a planned two-day stay in Naples: “Passione“, a superb documentary on  Neapolitan music.   I would have headed right for the train to Naples from the movie theater!

Naples draws me not just for the Pompeii treasures in the Museo Archaeologico, the street  of the creche-scene artisans (Via San Gregorio Armeno), the charming district  of the book-sellers  and the fascinating underground Greek and Roman cities. Naples is more than the world’s best pizza,  superb seafood, buffalo mozzarella and the delicious pastries reminiscent of the 19th-century French domination of the city.   Above all, Naples is her people.

Connecting with the Napoletani is effortless: as our train pulled into Napoli Centrale, Silvana and I were talking about the woes and wonders of Naples with an elderly man across the aisle and a younger Napoletano as well. No common denominator among us four except our love for Napoli.

Where else but in Naples could this happen:   on our second day there we were on our way to lunch at the Trattoria Nennella (a story in itself!) and stopped into a shop selling cellphone charger (I had left mine at home). I asked the price but balked at 15 E (I’d have my own again the next day).   The owner of the store asked me, “Troppo?”   (“too much?”). I explained that I  was hesitant because I only needed it for the afternoon.   After asking where we headed, he told me to enjoy lunch at Nennella’s and to pick up my cellphone on the way back: he’d charge it while were at lunch!

Naples: where a merchant charges your cellphone for you, thus  saving you the price of the chargers HE sells!

Trattoria da Nennella, “dal 1949”.   Nennella used to dish out Neapolitan homecooking here (her photos are all over the walls) and now her two grandsons reign: Ciro and Mariano. Ciro shouts welcomes to guests, Mariano waits on the crowded outdoor tables and shouts food orders through a window to kitchen staff (other servers work the indoor rooms – not quieter, not less crowded!). Verbal communication in Naples is at much higher decibels than we’re used to here in Umbria (or in Rome, for that matter). The lines for seating at Nennella’s (no reservations accepted) wound down the alleyway. Ciro often shouted out “trenta secondi!” (hard to believe you could be in a seat in not much more than 30 seconds…but turnover was rapid).
The food was simple and satisfying, inexpensive and best of all, all the crowded  tables were filled with Napolitani, happy to  chat with us. We wanted to leave our tip on the table: not at Nennella’s! Ciro led me inside so that I could leave the tip  (for all the staff) in the  panaro basket lowered from the ceiling  after Ciro shouted an order  in napolitano. That startled all the diners who looked up in suprise as the basket came down from the ceiling. Clapping all around when I dropped in our tip and they laughed when I said in Italian,   “..and I hope you’ll all do the same…!”

Now and then you still see the older Neapolitan women leaning out of the taller apartment building windows, lowering their baskets on a rope to the waiting baker (panaro) below who comes out of his shop in response to  their shout.   He’ll take the coins out of the  basket and then  drop in a loaf of bread.      The old Neapolitan woman  hauling up the  rope has just been spared a trek of perhaps three or four flights downstairs and then back up.

…and just before we left, another “only-in-Naples” experience here at Nennella’s, highlighted our Naples stay:   about ten young people, University students,  were sitting at the table near us, enjoying the food and each other in animated conversation.   As we got up to leave, I stopped to ask them if they were “veri Napolitani” (“real Neapolitans”). “Certamente!”, they all exclaimed. I told them that we had been in Naples for two days but had  to leave without ever hearing  musica napoletana. They looked at each other – and then they all started singing for me!

An old saying says, “Vedi Napoli e poi muori” (“See Naples and then you can  die”). I just hope I have lots more Naples visits to go.