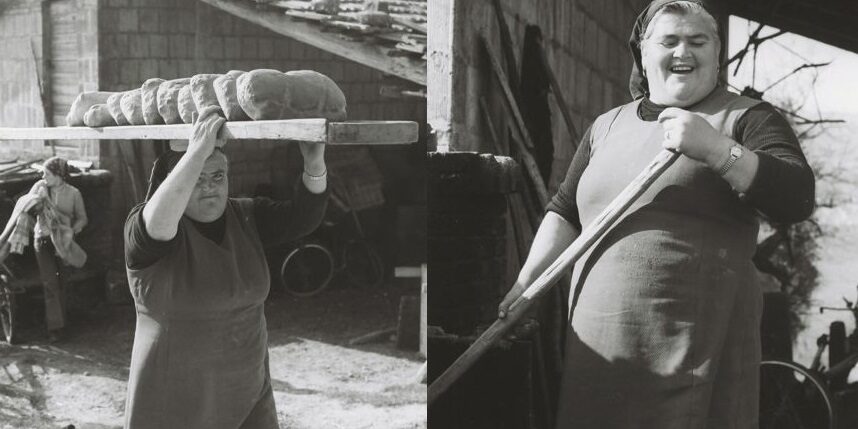 The crusty bread of central Italy is made without salt – and for me, enhances the savory tastes of our prosciutto and pecorino (sheep’s milk) cheeses (both salty).

Why is there no salt in the bread of Umbria, Latium, the Marches and areas of Tuscany?
The reason?  Explanations vary from geographical to culinary to historical aspects.  The distance from the sea of these regions and consequent difficulty in transport of salt is one theory. Another is the prevalence of salt in the salami, capocollo, prosciutto, sausages, pancetta (bacon) – as well as their cheeses –  made by rural families of these areas.

Peppe, proud of his prosciutti The most prevalent theory (without historical foundation) is the 16th-c Guerra del Sale (“Salt War”) in Perugia, under Papal yoke: present-day Umbria, the Marches, Latium, Abruzzo and a part of Emilia Romagna were all Papal States. To increase Papal income, the Farnese Pope Paul III levied a heavy tax on salt. As salt was an essential preservative in foods, it could be eliminated only in bread.

Nowadays, few of our farm women neighbors make bread in their outdoor bread ovens – as they all did in the 1970’s when we farmed. Once a week, they would come down the steps leading from the farm kitchen balancing on their heads wooden boards topped with loaves of bread.

The outdoor stone bread oven had been fired up with kindling and was ready to receive the loaves.
You can still see them outside the farmhouses, perhaps rarely used now for baking breads, though used for roasting geese and other meats at times.

A farm neighbor’s outdoor wood-burning bread oven, made by Pino! Peppa and her outdoor bread oven Chiarina with the broom (made of broom!) which is used to sweep out the ashes after the wood-burning oven is hot …and that bread is perfect for bruschetta: just rub the toasted bread with garlic and drizzle on olive oil. Final step? sprinkle with salt (as there’s none in the bread): Chiarina offers guests a taste of bruschetta, made with her bread and topped with the family’s olive oil Whatever its origins, our bread without salt is the welcoming taste of Umbria.