Preci: From the Benedictines to Pork Butchers

Living on a hill overlooking Norcia…. 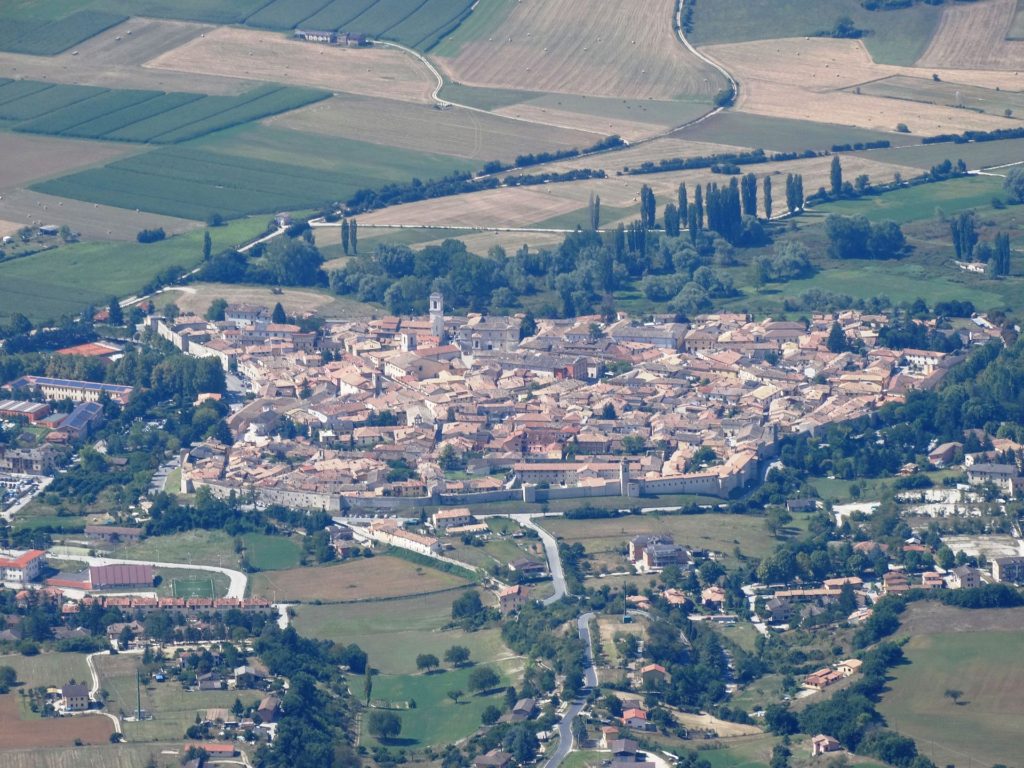 …..the Benedictine monks – affectionately called by all “the Monks of Norcia” – are known today for their production of artisanal beers. 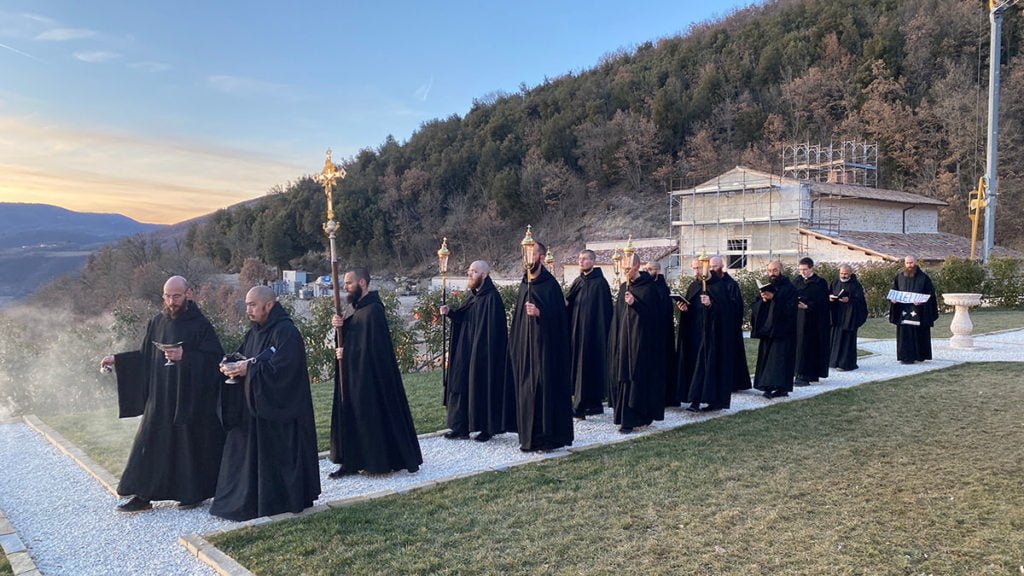 But many centuries ago, Norcia-area Benedictine monks were linked to prosciutto, sausages…and pig butchering.
I find the story fascinating.

And it all starts in the 6th-century.

After the late 6th-c devastation of Norcia by the Germanic Longobards, hegemony of this mountain town in southeastern Umbria ends:   Norcia is absorbed into the Lombard Duchy of Spoleto and governed by the gastaldo (administrative assistant of the Lombard duke), Ponte.

In this period of the High Middle Ages (late 5th-c to 11th c), spans of forests of the mountainous area of Norcia were cut down to increase the agricultural autonomy of the piccoli comuni (small cities, city/states).
Prior to the disboscamento (literally, “de-foresting”), the coloni (farmers –  who generally worked the land for others), sent their herds of pigs out to graze under the oak trees, fattening them up with acorns.

These nursini farmers quickly specialized in the anatomy, butchering, castration, and general health care of pigs and sold their salt pork products to nearby cities. In the nearby mountain town of Preci, their butchering and anatomical skills will be valued by the Benedictine monks of the Abbey of Sant’Eutizio.

(Note: above photo is of the Abbey of Sant’Eutizio prior to the October 2016 earthquake- which caused heavy damage)
By the early 13th-century, the intense studies of the Abbey monks included not only philosophical, theological and humanistic themes but also Greek/ Roman medical treatises as well.  The Benedictines of Sant’Eutizio also cultivated and scrupulously conserved medicinal plants, for the Benedictine rule included care of the infirm by the monks.
High in the mountains of Umbria, the Benedictine monks exchanged medical knowledge with the Scuola Chirurgica (“School of Surgery”) of Salerno (in southern Italy, Campania), first medical institution in Europe founded in the 9th-century.
The Salerno medical institution is depicted in a miniature in the 11th c Canon of Avicenna, a Persian medical treatise:

And by the 12th-century,  the surgical school of Preci – Pulchra Sabina Precces Prisca Chirurgis Patria (“Preci, beautiful Sabine castle, ancient town of surgeons”) –  was founded, famous in all of Europe from the late Middle Ages to the 18th century.
The monks of the Abbey specialized in various surgical procedures but in 1215, the Lateran Council forbade the practice of medicine to deacons and clergy. ‘
Desiring to preserve and transmit their medical knowledge and surgical skills, the Benedictine monks of the Abbazia di Sant’Eutizio began to instruct about thirty families of Norcia and Preci creating a veritable medical dynasty.
As the art of butchery (of pigs especially) was a skill of these villagers,  the art of medicine – and surgery in particular – came quite naturally to them. The fame of these “medical families”  peaked in the 16th-century and surgeons from the Preci/Norcia area were often called to the courts of Europe for hernia and cataract operations – and not only:   as of the 15th century the preciani became famous throughout Europe for the surgery performed on male singers which resulted in the dulcet voices of the castrati.
These Preci surgeons, after all,  had descended from a rural mountain people, adept at castraton of pigs and sheep, so as to attenuate the gamey tang, thus enhancing the flavor.
The medical instruments and medical texts of the Preci surgeons are on display in Preci’s Museo della Chirurgia (the Surgery Museum), closed now: all of Preci’s centro storico (historic center) is off limits due the October 2016 earthquake damage.

But outside the medieval walls of Preci,  a family of butchers – three brothers – carry on the Preci tradition passed on by their father: the butchering of pigs and transformation of the meat into prosciutto, capocollo, sausages, salami, and lonza  which they’ll sell in their norcineria.“Norcineria” can’t be translated with a single word: “a pork-butchery store selling other local products” sums it up.  And in just about every tiny mountain town near Norcia, you’ll find a norcineria.
Here’s some of the goodness of the one in Preci – not to miss on a future visit to Umbria: 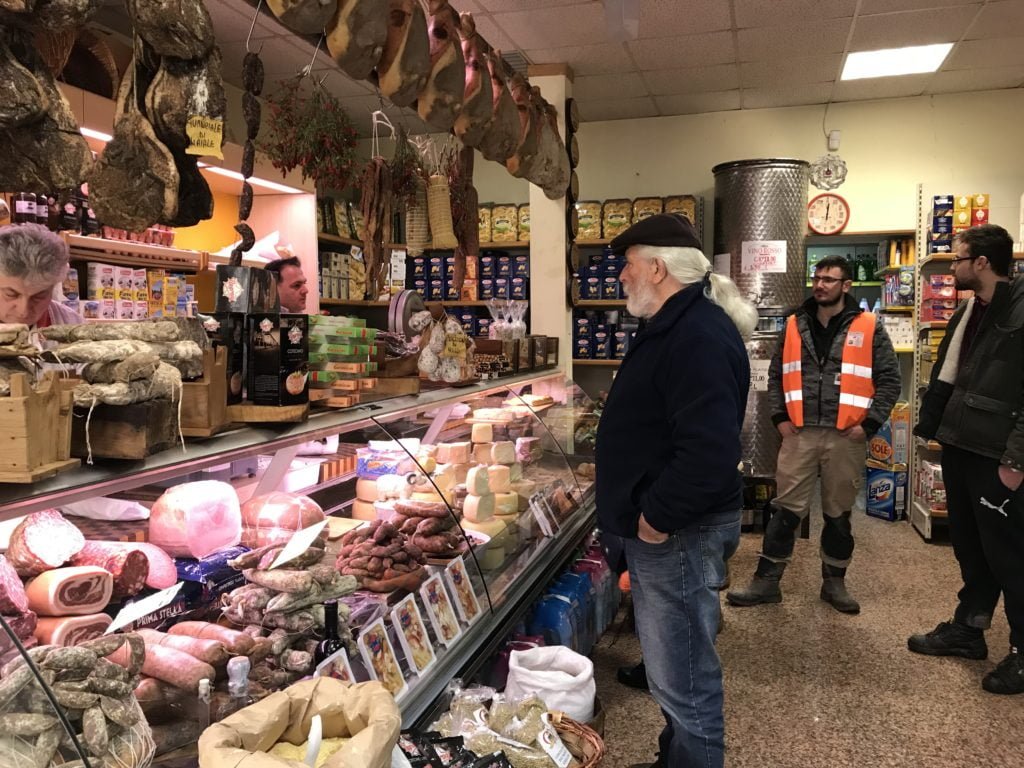