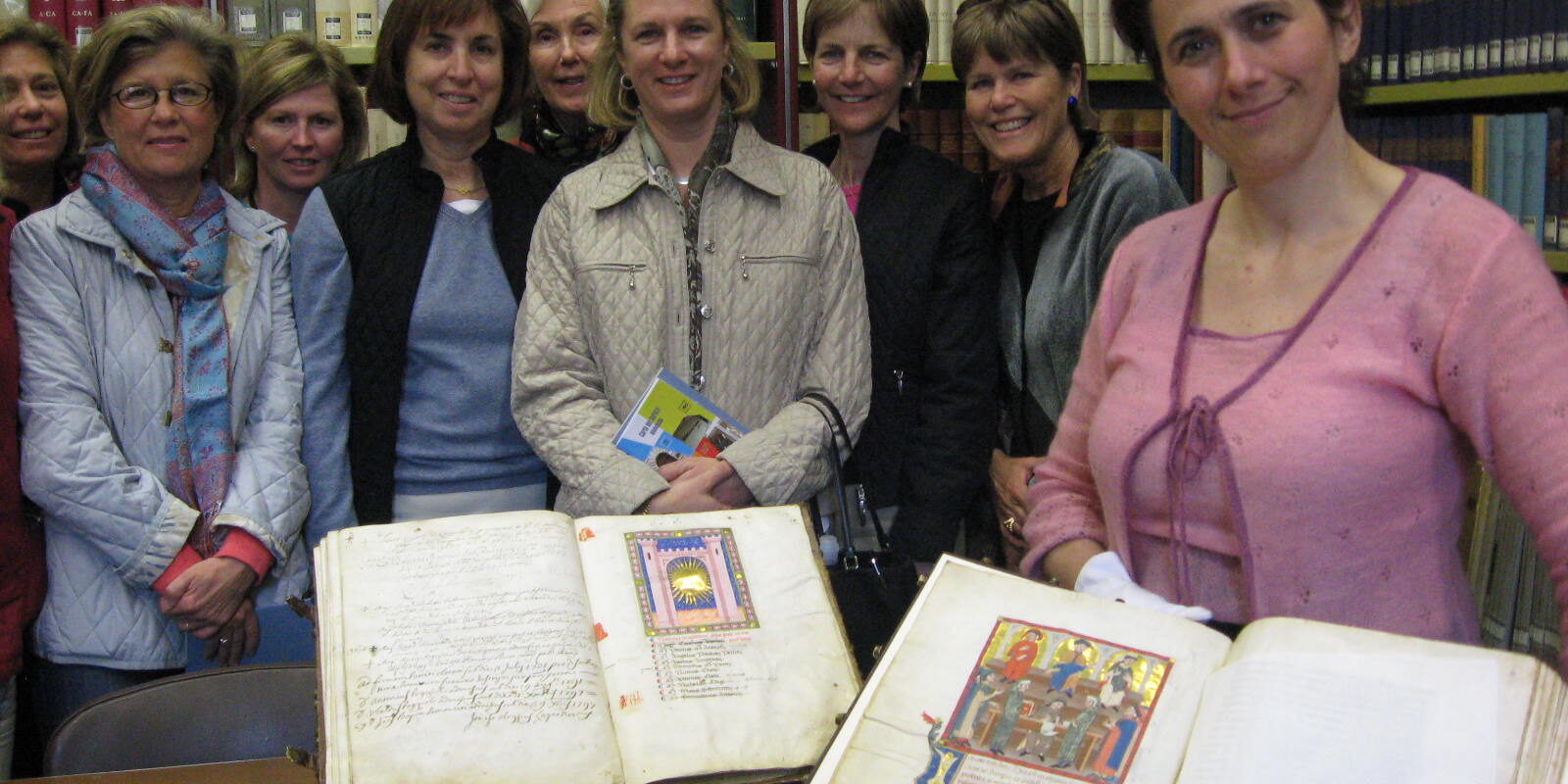 In 1872,  Henry James spent a week in Perugia, Umbria hilltown and one of the region’s two provincial capitals, lauding this medieval gem as “city of the infinite view.”

I always wondered when guiding in Perugia with my tour guests if he had written those words after standing here:

While in Perugia for a week, James wrote that “first care must be to ignore the very dream of haste, walking everywhere very slowly and very much at random.”

In his without-haste random wanderings,  I hope he discovered Perugia’s extraordinary library, la Biblioteca Augusta” (just steps away from where I took that photo)…

The library – one of the oldest public libraries in Italy –  now in the noble palace, Palazzo Conestabile della Staffa...

…originates with the 16th-c. donation of the great humanist and biblophile, Prospero Podiani, who grew up in a comfortably wealthy – though not noble  – Perugia family of civil servants and, most likely, was privately educated, perhaps also with instruction by a Jesuit.  Prospero was particularly influenced by a physician uncle, also Chancellor of Perugia for several years.

As a child the young Prospero developed una passione for books and learning, starting to collect books at an early age, considering them possessions to treasure. He spent money and energy on this collection and within a few years, he had a notable collection in need of a suitable accomodation.  He imagined an institutional library where his  ancient texts, illuminated manuscripts and books wold be available to all, appreciated and useful to many.

In the 17th-century, there were only three other European  libraries accessible to scholars : the Bodleian in Oxford, the Ambrosiana in Milan and the Angelica in Rome. The first book printed in Italy was Dante’s Divine Comedy, printed not far from Perugia in Foligno by the German typographer, Johannes Numeister, in 1472:

Thanks to  printing,  books became more readily available and their diffusion and circulation increased noticeably. Both printed books and hand-written manuscripts circulated widely and book collectors augmented their libraries. Private collections were frequently the personal treasures of princes, noblemen, bishops and cardinals.

With exceptions:  in Perugia, an ordinary man, Podiani,  put together one of the finest collections of the entire Italian peninsula  – the most important works published until his own day (along with relevant manuscripts) –  and donated over 7,000 volumes to the city of Perugia in 1582, agreeing to the foundation of the Biblioteca Augusta.

Today, the Biblioteca Augusta –  the most important historical-preservation library in Umbria – includes in its collection  over 3000 illuminated manucripts…

The collection has been enlarged, since the second half of the 19th- century  with the acquisitions of several important funds of private families and other additions, including precious documents from monasteries and churches at the time of the demaniazione, that is, the transference of Church funds and property (let us remember that Umbria was part of the Papal States) at the time of the Unification of Italy in 1861.

The Library’s 14th-c corale of Perugia’s Dominican monastery is an example:

Another example?  The exquisite 14th-c guild matricola (illuminated manuscript with names of guild members, guild norms) of those working with wool –  Arte della Lana – entered the Biblioteca  in  1888:

….and after various transfers over the centuries to different locations, in 1969 the library was transferred to the present seat,  the noble palace, Palazzo Conestabile  della Staffa,  near Porta Sole, one of the highest points of the city….

…decorated with ceilings painted in tempera by Felice Giani in 1810:

And here you see a view from the second floor of the Palazzo Conestabile:

Built in 1629 and designed by Jesuit architect Rutilio Clementi  in the mid-19th- century, the imposing Palazzo Conestabile della Staffa became principal residence of the Princesss Maria Bonaparte Valentini, niece of Bonaparte and wife of the finance minister of the Roman Republic of 1848. Maria Bonaparte started here a renowned“salotto,” that became a gathering place for exponents of the liberal and patriotic movement sof the city and was attended by a great number of scholars and academicians.

The Conestabile family adorned their palace with a precious collection of paintings, allowing the perugini to visit every Sunday.

I would imagine that Raphael’s Madonna del Libro (“Our Lady of the Book”), must have captivated all visitors:

It’s now in the Hermitage Museum in St. Petersburg, for in 1871, Conestabile and the mayor of Perugia paid a visit to the Minister of Finance of the new republic in Florence.  At their offer to sell Raphael’s Madonna,  the Minister refused the offer of purchase with a frown, sniffing, “we have Madonnas up to our ears.” Shortly, the director of the St. Petersburg Museum appeared on the scene, purchasing it for the Czar Alexander II to give to his young wife.

Alas, though he was apprenticed here in Perugia to Perugino, no Raphael masterpieces remain in Perugia (and one imagines that the young painter certainly might have taken on his own commissions while apprenticed to Perugino).  The single  exception is the San Severo Benedictine monastery fresco (albeit, mostly painted by the elderly master, Perugino – with Raphael’s hand seen by art historians in the upper part):

Raphael’s Madonna del Libro no longer adorns Palazzo Conestabile – but the palazzo houses many another  priceless treasures.
Years ago as a guide, I was able to procure permission at times to take small groups to view some of the masterpieces  of the Biblioteca Augusta as the highly-specialized librarians recounted to us the stories of the treasures.
Stupendo!
Here are two of the jewels:  the tiniest book in the collection – and the largest one:

I have few photos of those unforgettable experiences (and I so regret not keeping a diary with notes on all we learned during these visits):

Jerry Spector, mille grazie for your photos taken while touring  there together:

It seems appropriate to me to close this note with a tribute to Prospero Podiani.
To do so, I’d like to share the words of Perugia ‘s Assessore della Cultura Teresa Severini in November, 2016 during an event at the Biblioteca Augusta commemorating the 400th anniversary of the death of Perugia’s great humanist, Podiani:
“We wish all our Perugia citizens to know Prospero Podiani, a man who wished to always share his books and his knowledge, not only among his ‘friends’ but with all of his fellow citizens, leaving to Perugia his enormous library collection – a function that is today typical of libraries, places of sharing and of aggregation. Stupifying is the ‘modernity,’ the openness of that which we would define today as  “the nternationalization” of Podiani. He represents a most significant example of civic sense.”
I’m eager to return once again to the Biblioteca Augusta.    Care to join me?
Click here to read about  a bellissimo Perugia guildhall.
Read about more medieval splendor in Perugia
Click here to read about Palazzo dei Priori a Perugia.
Read about the festivities for San Costanzo, one of three patron saints of Perugia
Click here to read about – and see – the 16th-c Papal fortress, la Rocca Paolina
Read about – and see – the medieval majesty of Perugia’s Notaries Hall
Share this post
Share on WhatsAppShare on WhatsApp Share on FacebookShare on Facebook TweetShare on Twitter Share on LinkedInShare on LinkedIn