…the retreat of San Francesco, Eremo delle Carceri –  called “the Hermitage” – remains a silent place of retreat and seclusion.

As of September, a Tuscan Franciscan, Father Simone, has served as padre guardiano (“father custodian” – that is, the Franciscan community’s “father superior”) for the community of four.

I asked him his feelings about being assigned to the Eremo delle Carceri. He told me, “A gift of God – a privilege. This Eremo is the most Franciscan place there is, the closest to the life of St. Francis. I didn’t even know how much I needed this place until I arrived. The fraternity, the daily work, the intense moments of prayer…this welcoming to the Francesco way of life…”

The name carceri derives from the Latin carceres, meaning “isolated, remote places” or “prisons” and this “Hermitage of the Prison” is in a way, a chosen self-imprisonment.  In the early 13th-century, Saint Francis of Assisi would often come to this secluded place in the woods of holm oaks for periods of prayer and contemplation – as had other hermits before him. Very possibly, Christian Syrians fleeing persecution, retreated here in the 6th century.

When San Francesco first climbed the hill to arrive here in 1205, the only building was a tiny 12th-century oratory for the site had been given to the Benedictines by the city of Assisi (who then gave the Eremo to San Francesco and his Frati Minori in 2015). The small oratory became known as “Santa Maria delle Carceri” after the small “prisons” occupied by friars in the nearby woods.

At times, a few of the companions of Francesco would withdraw with him to the mountain refuge, each finding an isolated cave in which to pray.  If you walk the trails around the Eremo delle Carceri today, you might come across the grottoes where the frati prayed.

…and that of Bernardo da Quintavalle… 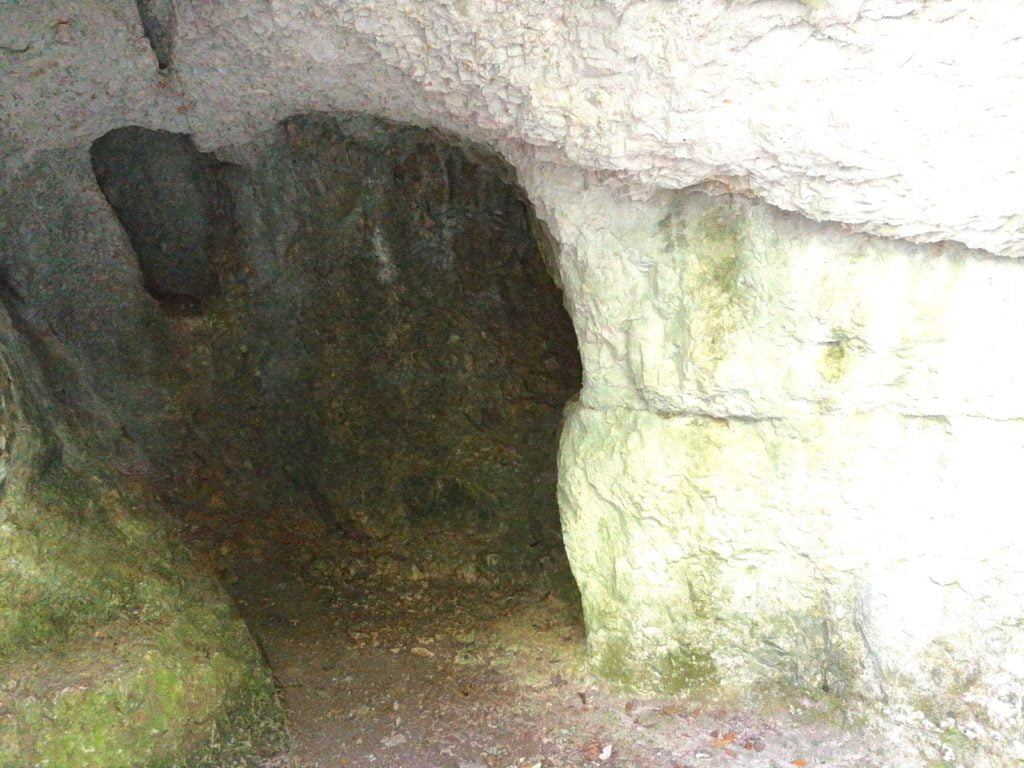 [136] Those who want to remain in hermitages to lead a religious life should be three brothers, or four at most; of these, let two be “mothers” and have two “sons,” or one at least.  The two that are “mothers” should maintain the life of Martha and the two “sons” the life of Mary, and have a single enclosure, in which each may have his cell to pray and sleep in.

[138] The “sons,” nonetheless, should now and then take over the duty of the “mothers,” according to what arrangement they have come to about taking turns at intervals. […]

As Father Simone, O.F.M. explained to me, the two taking on the role of “Mary” (sister of Martha and Lazarus as recounted in the Gospel of Luke), would dedicate their days only to prayer while the two in the role of “Martha” would handle all the necessary work of a household. About every ten days, the roles would switch.

Generally, the brothers would withdraw to the Hermitage for about 40 days. Francis himself retreated for 40 days of prayer about five times per year.  Father Simone told me, “He desired the periods of prayer – and often, fasting – to give him the strength and force he needed to continue his mission of preaching.”

As you arrive at the Hermitage today – whether you hiked up through the woods from Assisi or drove the road – you’ll enter through a simple portal topped by Carlo Gino Venanzi’s fresco (20th c) of the Virgin flanked by St. Francis and St. Clare in a niche:

Walking the path towards the monastery in springtime,  you’ll see wild cyclamen bringing flashes of deep pink to the woods…

As you near the monastery, you’ll be welcomed by Francesco, depicted in bronze statue inaugurated here in 2016, “San Francesco dell’Amore Universale” (“St. Francis of Universal Love), the sunburst behind him bearing Muslim, Judaic and Buddhist symbols.

At the Eremo delle Carceri entrance, a few steps lead you into the charming  chiostrino dei frati  (“friars’ small cloister”) of the 15th-century monastery built of the pink and white limestone quarried on Mt. Subasio under direction of San Bernardino da Siena.

In the middle of the chiostrino, a small well stands where, according to legend, water spouted thanks to a miracle of St. Francis.

Just opposite the well, a door leads into the refectory, a terracotta monogram of San Bernardino over the door.

Go through the door  into the 15th-century refectory, a vase of flowers or a  plant always put at the place at the head of the table where San Bernardino sat, for he was padre guardiano –and therefore first up to take care of his brothers, serve them at table:

Frati minori (the “little brothers” of St. Francis) had started to live here on the mountain  in poor and primitive shelters as of the late 13th-century.  In the early 15th century, Saint Bernard of Siena oversaw the building of  this simple refectory, the chiostrino, a small church, choir,  and dormitory.

(As needed, other simple buildings followed in later centuries)

Leave the refectory through the door under the fresco of the Last Supper (15th-century and painter unknown, perhaps a friar…?), and the cross carried by San Bernardino is on a wall on your right:

Look at the  high steps nearby to see the cells of the 15th-c hermitage, clearly carved into the limestone bedrock (which you’ll note on the right):

The few cells at the top of the steps have low doors and a friar once accompanying my tour guests and me through the Eremo told us that the frati were to bow their heads when entering to remind them of their insignificance:

As you leave the dormitorio and refettorio, heading back outside to the small cloister, you’ll note a low roof over an open door, the entrance to the Cappella di San Bernardino.  This small vaulted chapel is frescoed with an early 15th-c depiction of Francesco in prayer at the foot of the Cross, the Virgin behind him, her gesture urging onlookers to view the suffering of her Son.  John the Apostle looks up at Christ, hands clutched in prayer.

The symbol of the Monte di Pieta’ (pawnshop)  – the Crucified Christ taken down from the Cross – is depicted on the altar front.

The next room is the simple Cappella di Santa Maria delle Carceri, dug into the bedrock.The fresco of Tiberio d’Assisi (1506)  – painted over a 13th-c fresco – depicts the Madonna with Child and San Francesco frescoed over a 13th-century Crucifixion:

Bow your head as the stone-vaulted passageway down to the Grotta di San Francesco is narrow and low:

In the first part of the grotto, is the slab where San Francesco rested, using a log in place of a pillow…

…and the second part of the grotto is the place where he meditated – a Cross like the one said to have spoken to San Francesco at San Damiano is there now, the only object in the grotto:

As you exit the grotto, you’ll see a holm oak which legends designate as the tree where St. Francis spoke to the birds…

…though Franciscan sources designate that place as Pian d’Arca, near Bevagna:

Just beyond that tree, a path leads through the woods, taking you past the various grottoes where St. Francis’ followers took refuge while there…

…and to an altar made of blocks of limestone faced with a metal TAU cross. Francesco always signed his name with that Tau, symbol of salvation in the book of Ezechiel.  Groups sometimes gather here for liturgical services 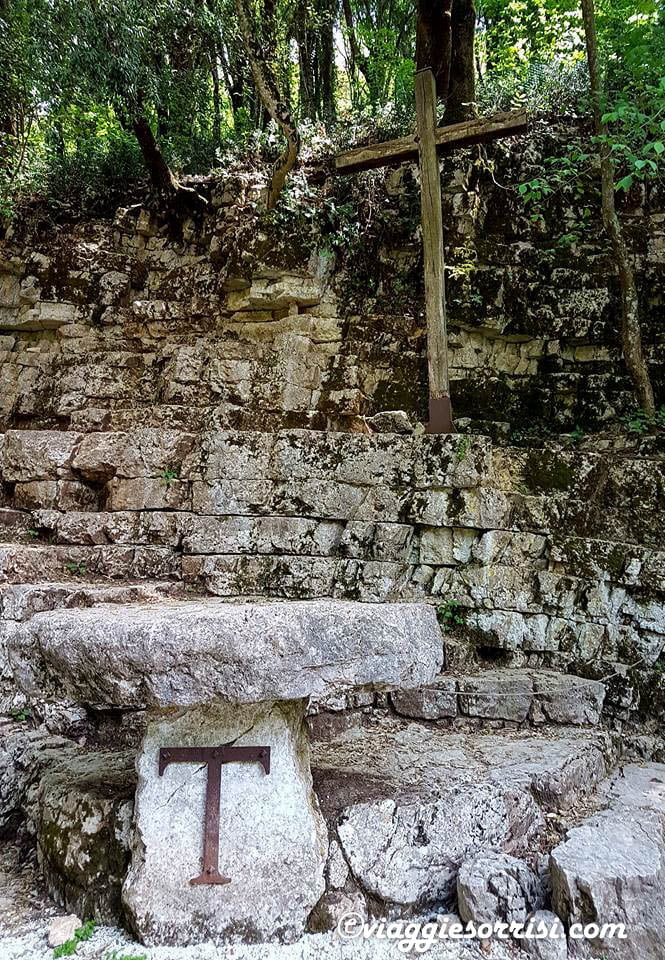 From this point, you can continue your walk, following that path for kilometers if you wish or you may wish to head back to your point of entry.

To do so, you head up some steps, passing the small church dedicated to Santa Maria Maddalena…

…where Holy Barnaba Massei of Terni, founder of the Monti di Pieta’ (“Mounts of Piety”) – the pawnshops – is buried. He devised the first modern pawnshop in 1462 in Perugia with the help of Fortunato Coppoli – well-educated Franciscan of noble Perugia  family, expert in judicial matters – as a means for the poor to avoid the grasp of the usurers.  For some time the frati minori of San Francesco had attempted to resolve the evils of usury.  The apostolic delegate in Perugia assisted in the establishment of a Monte di Pieta’ in Perugia with one soon following in Orvieto, then in Gubbio and in other Umbria towns.

Thus, more than two hundred years after Francis withdrew to caves and grottoes on the wooded slopes of Mt. Subasio,  Frate Barnaba Massei,  one of his followers who dedicated his life to assisting the poor, was buried here.

As a Franciscan scholar has written, “The vision of Francesco was more eschatological while more pragmatic was that of Banaba…but both entered fully into the resolution of the problems of all men…”

You’ll feel their spirit at the Eremo delle Carceri.

Tip: How best to arrive there?  Buy a map of the trails of Mount Subasio and take one of the many hikes that lead to the Hermitage. You’ll thus have a full sense of this place of retreat, refuge.

Read about another Assisi spot of peace and reflection