In one of the twenty-eight late 13th-century  frescoes in the Basilica Superiore di San Francesco recounnting the life of St. Francis, San Francesco prays before a Byzantine crucifix in a rundown church asking the crucified Christ, “Lord, what do you wish from me?”  Francesco’s open hands are perhaps a gesture of astonishment as he hears the reply from Christ. Franciscan sources tell us that Christ replied, “Can you not see, Francis, that my House is falling down? Go, then, and restore it.”

That crumbling church was San Damiano, outside of the medieval walls of Assisi. Wishing to restore the church, Franciscan sources tell us that Francesco loaded his father’s horse with fine bolts of fabric of his cloth merchant father and headed off to the Foligno market to sell them. He sold the horse as well as the cloth, walking back the 22 km. happily to Assisi and giving the astonished poor priest of the crumbing San Damiano the money to restore the church.

That nearly-abandoned church was certainly empty in 1205 when Francis prayed there.  It was blissfully empty too on my recent visit there during this period of partial lockdown keeping many at home – or close to home.

According to ancient medieval documents, the Church of San Damiano was property of the Benedictines in the early 11th – century and built on the site of an 8th-9th century edifice.   But the Romans had settled in this area long before; in fact, not far away are the springs of Santo Raggio (or Santureggio in assisano), considered miraculous waters from the Roman times throughout the Middle Ages.

And if you with to walk to take the short walk to  San Damiano from the Assisi center, the Via San Damiano leads you downhill to the church, winding in the midst of olive groves ..

… and taking you past remnants of a Roman tomb (probably 1st- century A.D.):

The Roman ruins flank a small chapel, la Cappella di San Feliciano,  called by the locals “San Felicianuccio” or “Little Saint Feliciano.”  Named after the 3rd-c A.D. bishop of Foligno, San Feliciano, the tiny chapel is built on the site of an ancient church, said to be site of the martyrdom of the Foligno saint.

At San Damiano, the early 20th-c bronze statue of a stern St. Clare (Santa Chiara) greets you.  The image depicts Clare defiantly holding high the monstrance – bearing the Sacred Host –  as she did before the Saracens threatening the convent when sent to attack Assisi by the Emperor Frederick II in 1240.

San Damiano had become the refuge in 1212 of Clare and her group of Damianite (“the women of St.Damian,” later known as “Clarisse” or “Poor Clares”), those women following the life of poverty of San Francesco.

It is not possible to know the extent of restoration the young Francesco was able to do on the building in the years following 1205 but certainly the building underwent extensive reconstruction and restoration after the arrival of the Damianite.

As you enter San Damiano today, the first fresco greeting you depicts both the Assisi saints so closely linked to the church, St. Clare and St. Francis. The saints flank the Madonna and Child and San Francesco presents a pious man to the Virgin and Child, probably the patron who paid for this fresco, painted  the 14th-century by the Maestro di San Crispino, a local painter:

God conferring His blessing reigns above the group and the patron saint of Assisi, 3rd-century bishop-martyr, San Rufino is to their left…

…..and San Damiano, to their the right:

In the arcade nearby,  in the early 16th-century, local artist, Francesco Tartaglia, frescoed votive figures of the saints Francesco, Claire, Sebastian and Rocco.  The last two were often invoked at the time of the black plague and other pandemics – as were the Roman twin brothers and  doctors, Cosma and Damiano, martyred in the early 4th-century A.D.

Clare holds lilies, symbol of purity and her breviary (or Bible) and Francis holds the crucifix and Bible,  his stigmata wounds clearly visible on hands and feet, as well as the sword wound in his side.

Saint Sebastian, 3rd century martyr-saint, is pierced with the arrows of his martyrdom…

…..while 14th-c French pilgrim saint,  San Rocco,  who miraculously healed those with plague while enroute on pilgrimage to Rome,  holds a pilgrim’s staff and points to a pustule on his thigh.

The devotion to San Rocco has always been very diffuse in Italy – and especially dear to the Franciscans –  with 3000 religious sites throughout the peninsula dedicated to him.

They both appear again here at San Damiano just a short distance away: near the fresco, you’ll see a door which leads to the Cappella di San Girolamo (Chapel of St. Jerome).  At the bottom of the steps into the chapel, Tiberio di Assisi frescoed San Sebastiano and San Rocco in the early 16th-century:

In the lunette of the chapel, the same Tiberio di Assisi – who also frescoed at St.Francis’ Hermitage – frescoed the Madonna with Child and Saints Bernardino, Jerome, Francis, Clare and Nuns in Adoration in 1517.

In the next room hangs a dramatic wooden crucifix sculpted in the early 17th-century by a Franciscan friar, Brother Innocenzo da Palermo.

The locals will tell you that Christ’s expression changes depending on  the position of the observer.

The adjacent church has a single nave with an apse and a modern replica of the crucifix of San Damiano which spoke to Francis in 1205 hangs over the altar.

The original crucifix is in the Basilica di Santa Chiara…….

…..for after Clare’s death in 1253 , the Poor Clares donated the Church of San Damiano to the Cathedral of San Rufino, obtaining in exchange the 12th-century Church of San Giorgio which the Damianite desired as a tomb church for the body of their holy founder. After numerous difficulties, they finally obtained ownership thanks to the stern intervention of Pope Alexander IV and then work started on construction of a basilica in honor of the saint canonized in 1255, the Basilica di Santa Chiara.  In 1260, her body was entombed under the altar.

Behind the copy of the San Damiano crucifix and the altar, a fresco fills the arch over the 14th-century wooden choir stall. The fresco – discovered in 1927 – depicts the Madonna and Child between Saint Rufinus, patron saint of Assisi, and San Damiano and is attributed to the Maestro di Farneto (13th-14thc.):

If you return outside to the front of the San Damiano complex, you’ll see another door, down a couple steps, on the left.  The door leads to a silent, peaceful cloister, built in the 16th-century when Franciscan friars were then living here – as they do now.  On a recent visit, pink and red  geraniums added bright swatches of color to the monastery’s pale pink limestone of Mt. Subasio.

On a corner wall, the city council members of Assisi, i Priori,  commissioned Eusebio da San Giorgio di Perugia –  student of the great Umbrian painter Perugino –  to fresco an Annunciation and Stigmata di San Francesco. On my recent visit to San Damiano, the only other person I met was a Franciscan friar living there, Padre Mauro, O.F.M. who pointed ou to me various symbols details in the frescoes. 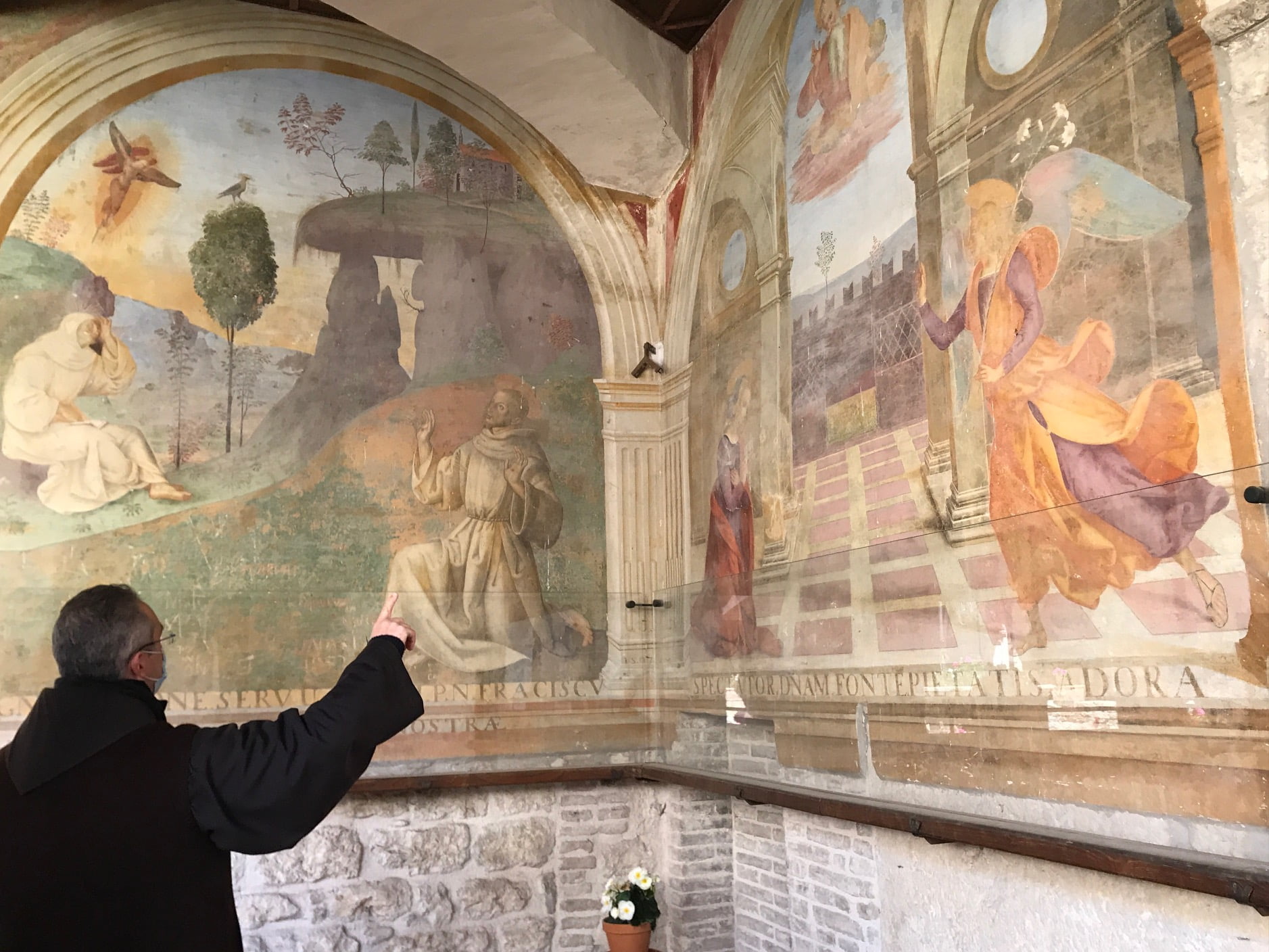 Just to Padre Mauro’s left, an open door permitted a look into the vaulted refectory of the Damianite, though admittance was not permitted.  Flowers are always placed at the spot where St. Clare sat at table with her consorelle (“co-sisters”).  A fresco of St. Francis at the foot of the Cross hangs at this end of the refectory, work of the school of Cesare Sermei (17th-century)…..

…and a fresco by the same artist is on the wall at the opposite end of the refectory.  The scene depicts the visit of Pope Gregory IX to the Damianite when Franciscan sources tell us the imprints of  crosses  miraculously appeared on the loaves of bread after St. Clare blessed them upon request of the Pope.

Returning to the church, you’ll find access so a long narrow stairway leading up to the Oratorio di Sant Chiara, a small vaulted room where Clare often withdrew for silent prayer……

…..and remained during the long years of ill health, following the celebrations of the Mass in the church below by looking through a hole in the wall.

Up a few steps, you’ll enter the dormitorio, a cross indicating the spot where St Clare died in 1253. According to tradition, St. Clare stood in a nearby doorway  in 1240 holding the monstrance bearing the Sacred Host, thus putting to flight the Saracen troops of the Emperor Frederick II.

San Francesco had stayed at San Damiano as well many years prior and for about fifty days in 1224, just two years before his death.   At that time his  torturing chronic eye illness allowed him little rest neither day nor night.

And before you leave this place of serenity and silence,  you’ll want to look out at the Giardinetto (“small garden”) di Santa Chiara, facing onto the Spoleto valley spreading out below, for according to tradition,  it is here that San Francesco composed and recited his Cantico delle Creature, one of the first poetical works in the Italian vernacular.

This first copy of the Canticle was written down in the late 13th-century and is conserved today in the library of the Franciscan monastery adjacent to the Basilica di San Francesco, little more than a kilometer away.

You may wish to head there after your visit to San Damiano.  For your return towards Assisi, head out the stone pathway in front of the entrance, cypress trees  towering alongside the walkway.

On your left, you’ll see Fiorenzo Bacci’s contemporary bronze statue of San Francesco under the olive trees, a gift of pilgrims from Calabria. Near the bronze statue, a plaque recounts the story of Francis’ stay at San Damiano when he composed the Cantico delle Creature.

Bacci’s seated San Francesco seems to be looking out contemplatively over the valley below, reflecting on the elements of creation which he had praised in his Canticle.  And reflecting, too, on the serenity of this venerated and inspiring Franciscan site.

Read about another Assisi spot of peace and reflection
Read about the Basilica di Santa Maria degli Angeli, focal point for Franciscans
Click here to read about the Eremo delle Carceri, St.Francis’ retreat