Carnevale, Castagnole  and Other Pleasures

With January 17th and the Feast of St. Anthony, Carnevale (Mardi Gras) took over here in Italy and will reign until martedì grasso (“fat Tuesday,” the day before the beginning of Lent on Ash Wednesday). Our family knows it’s Carnevale time when Peppa comes visiting with the traditional sweet, castagnole ((recipe below). I remember Mattia’s enthusiasm especially for her castagnole:

Peppa likes to douse hers with alchermes, a sweet red liqueur of rosewater and spices, originating in Persia. Giuseppa drizzles honey on the struffoli (larger castagnole) she makes for her husband, Paolo – before they head out for a Saturday night of ballroom dancing. Peppa, proud of her castagnole

Many years ago when we worked the land, I remember our farm neighbors gathering in the largest farmhouse kitchen on week-end nights for Carnevale ballroom dancing, the farm women bringing bowls of just-made castagnole, tied up in a clean dishtowel. An accordian player would be sitting on a chair put on a table – so all could see him – as couples danced around him. All chipped in a few coins to pay him.

And nowadays on Saturday nights during Carnevale, dance halls in the rural areas fill up as couples of all ages swirl around the dance floor in waltz, fox trot, mazurka, tango and polka to live orchestra music, feasting on many courses in the adjacent dining room during the evening. Dessert? Le castagnole and maybe frappe’, a ruffled ribbon of dough, fried and then dipped in sugar or honey or alchermes liqueur. These traditional sweets are piled on trays now in Umbrian bakeries but our local farmwomen neighbors still make castagnole on their woodstoves.

….after all, Carnevale is equated with pleasures of all types. The name derives from the Latin “carnem levare,” a medieval expression which indicated that period of abstinence (no consumption of meat) prior to Lent (called in Italian “la quaresima”, ie, “the forty days”). Carnevale festivities tie to celebrations of over two thousand years ago, the Roman Saturnali latini, days of transgression of usual rules and regulations – a moment of illicit abandon when citizens could take on completely different social roles and dress (i,e the costumes of later Carnevale celebrations).

During the Christian era, the Roman rituals were transformed but the dressing up in costume – indicating the taking on of a different social role – was picked up again in the sixteenth century. Here in Umbria, on the last two Sundays of Carnevale, town piazzas fill with children in costumes. In Sant’Eraclio (near Foligno), Guardea (near Orvieto), and Montecastrilli (Todi area) fanciful carri allegorici (“floats”) add to the festive spirit. Carnevale celebrations nowadays…

Enjoy the photos of carri allegorici 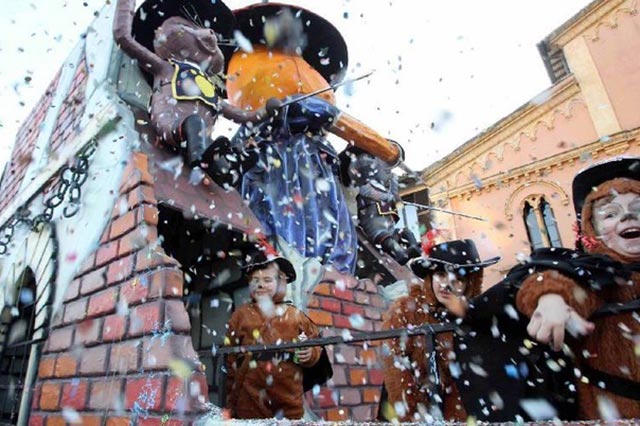 Carnevale, Castagnole and Other Pleasures 05 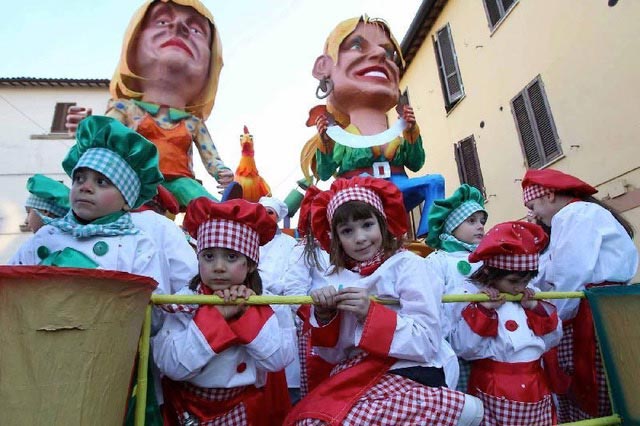 Carnevale, Castagnole and Other Pleasures 04 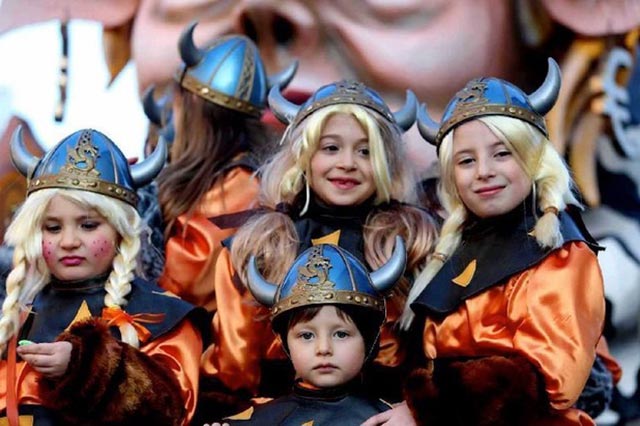 Carnevale, Castagnole and Other Pleasures 03 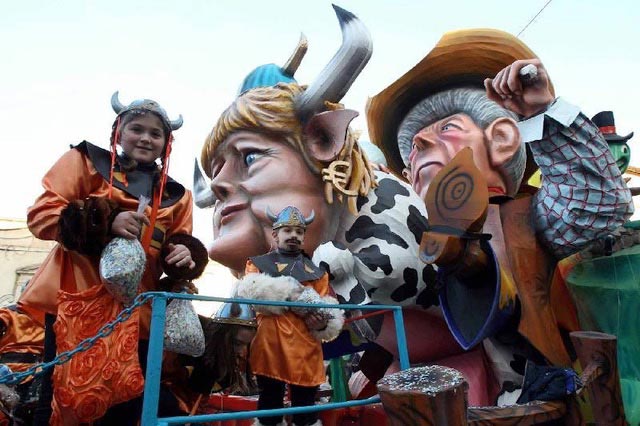 Carnevale, Castagnole and Other Pleasures 02 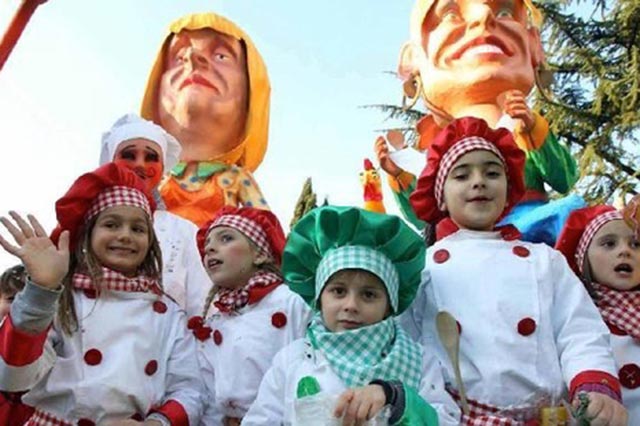 Carnevale, Castagnole and Other Pleasures 01

Our farm neighbor Marino shared with me a memory of a Carnevale dancing evening years ago. He was about eighteen, had put on his best clothes and new shoes and was heading quickly over to a neighboring farm for dancing (in the huge kitchen), eager to waltz with the young Chiarina (who would one day be his wife). Marino (1976)
Thanks to J. Kevin Crocker for his photos Evening visit of Marino, his uncle Peppe and his papa’, Genuine (1976, in front our our farmhouse fireplace)
Thanks to J. Kevin Crocker for his photos

…..and here’s recipe of a Carnevale sweet for you (delicious all year round):

Mix together all ingredients except honey and alchermes – con energia! – until forming a well-mixed batter. Add flour as needed or additional milk if needed. Let rest an hour. Put enough sunflower seed or other vegetable oil in saucepan for frying. Drop tablespoonfuls of the batter into boiling oil. Remove when each castagnola is golden, placing on paper towel so as to absorb the oil.
When all the castagnole have been fried, drip honey over them or splash with alchermes.

Note: Years ago, pig lard was used for frying, ie, an animal fat, thus making the castagnole not suitable for consumption after the beginning of Lent.
A tip for frying: keep flame low as frying starts, raising the heat gradually and reaching maximum heat just before removing the castagnole from the oil.