Singing in May in Umbria… 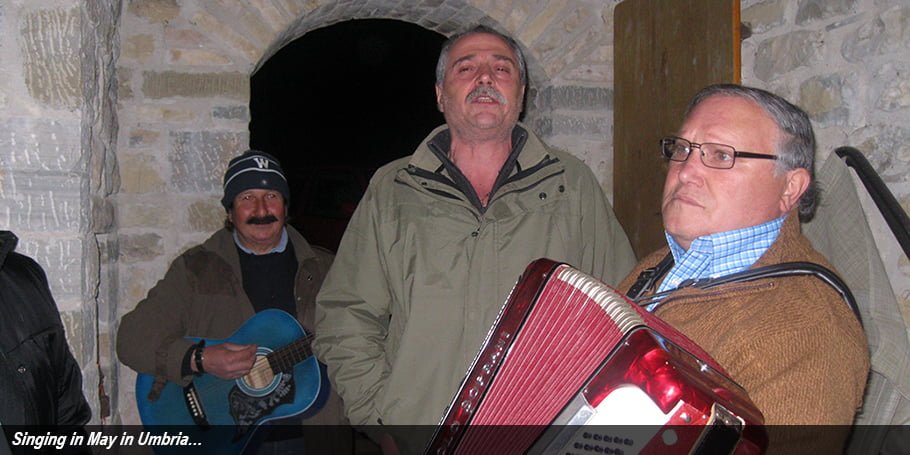 Pino and I had been working the land here outside of Assisi for about eight months and collapsed into bed exhausted on April 30th (1975) – as we did most nights in those days! At around 2:00 am, we were awakened by robust, joyous male voices singing under our window, accompanied by rollicking accordian music and the jangling of a tamburine: our first introduction to the maggiaioli! (“May singers”). We had no idea what was happening since the cantarmaggio (“singing in May”) tradition has no roots in Sicily (Pino is from Palermo) and certainly not in Milwaukee, Wisconsin! Only rarely now do the squadre (groups) of the May singers roam the Umbrian countryside on the vigil of the “birth” of May, singing in the arrival of the month of flowering, fecundity and fertility. So rarely in fact that the accordian, tamburine and voices singing under our bedroom window this year at 3 30 a.m had us bounding out of our beds in elation! The maggiaioli were back! A few new faces but some of the same ones as that night in 1975. Back then, we did not know how to receive them: this time we did. We joined them outdoors first and clapped as they sang to us and then invited all the brigata into our home for vino rosso and cake (had we known they were coming, salami, capocollo, bread and prosciutto would have been ready, too). Sustenance is needed: the maggiaioli had been singing since about 10 pm and would sing all night from house-to-house, until voices and strength gave out late the morning of May 1st. We no longer have chicken, ducks, geese, turkey and guinea fowl so we were not able to give the traditional gift of fresh eggs. In past times, most of the farm people were mezzadri (“share-croppers”) and had little to give the maggiaioli except the gifts from their farm labors. May is the month of fecundity, fertility and regeneration as all of the natural world moves into cycles of reproduction: eggs are a perfect synthesis of all that May represents. The maggiaioli used to sell all the eggs they collected in a night of singing to finance a huge meal together some weeks after April 30th.

Their May songs (cant’arrechia – “sung by ear” – as no music is read and the songs are passed down) generally begin with an invocation to Maria to bless them and inspire them with harmony as they sing their jocund – and often a bit lascivious! – songs about fecundity, fertility. Ah, this pagan/Christian mix so inherent in all Italy’s festivals! After all, the Church declared May the month of Mary in order to supplant the orgiastic rituals in honor of the goddesses Flora and Bona during that month. The rebirth of all of Nature – the flowering and germination of plants and flowers, the sprouting of the new wheat, the birth of lambs and fowl – is lauded in the May songs.

To read about another Umbrian welcome to May, click here.

To read about Umbria’s extraordinary May festivals, click here.