Artistic and Artisan Heritage of the Assisi Textiles

“There isn’t a day that I don’t have a needle in my hand,”  Antonietta told me as we talked about her passione for the embroidery of the punto Assisi (the Assisi stitch).  She grew up with a passion for the punto Assisi for her mother created textile masterpieces in this stitch.

s a child, Antonietta  watched her work and at about age 15, she, too started doing the Assisi stitch…and never stopped.  This is one of her first works… 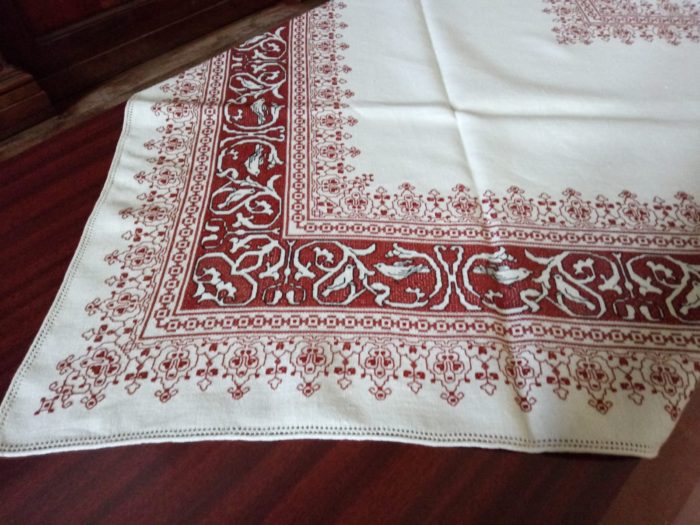 and this is her latest project: 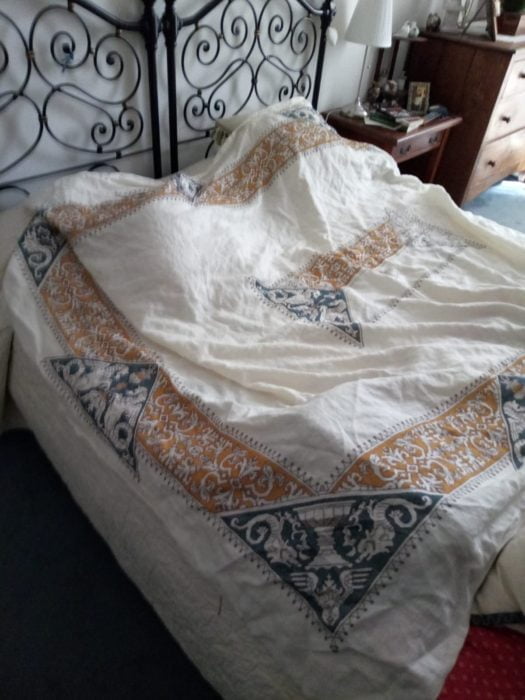 I asked Antonietta about her motifs and choices of designs and she replied, “I love to experiment and each of my works represents me. I study the force of the work.”

Many of Antonietta’s embroidery designs are inherited from a distant cousin, born in 1872 who worked on the punto Assisi from the time she was a child until her death in 1946.  She taught embroidery to young Assisi women with fifteen assistants also experts in the Assisi stitch.  The scrolls  bearing her designs have always been a family treasure. Antonietta and a cousin (male), also appasioned of the punto Assisi, divided the scrolls with designs between them. 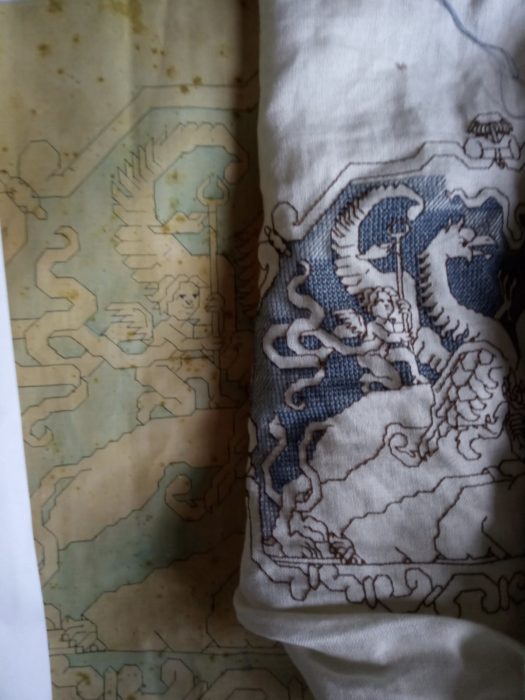 Various scrolls bearing the designs had hand-written labels scrawled by an elderly Maria which indicated little information on its artistic origins.  One was labeled “Orvieto pillow.”  Antonietta made it, unsure of the specific Orvieto art work which inspired it.

That pillow is here – on the left in the back – with her other embroidered pillows: 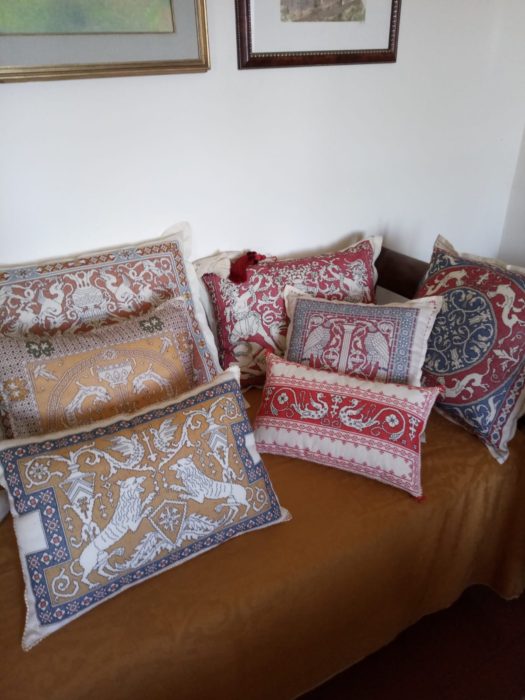 …and here it is in detail: 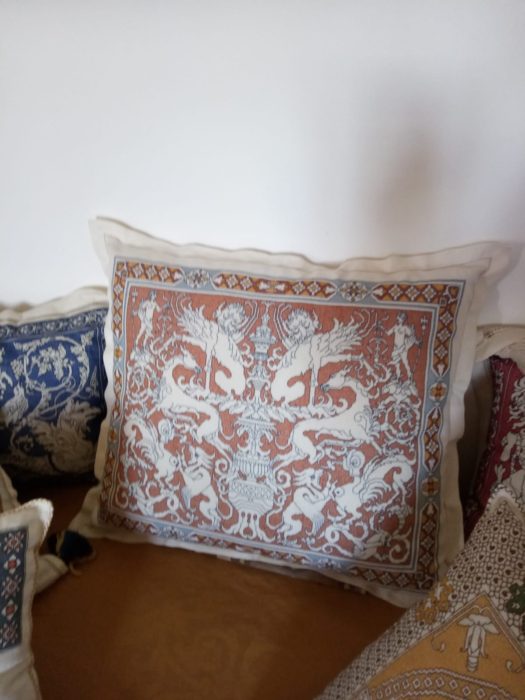 One day,  browsing in the Zubboli bookshop in Assisi, she recognized the pillow motif as she gazed at photos reproducing Luca Signorelli frescoes (1499- 1502) in the San Brizio chapel of the Duomo in Orvieto.  The grottesche motif in a Signorelli fresco had inspired Signora Maria’s design, as you can see in this detail of the fresco: 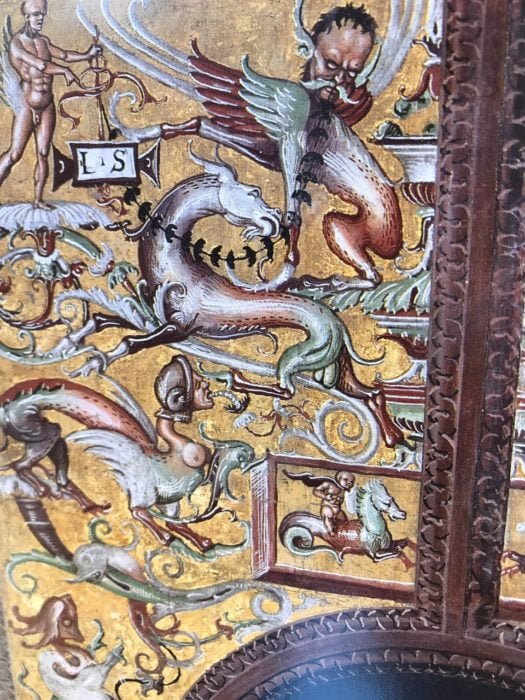 And that detail comes from this fresco: 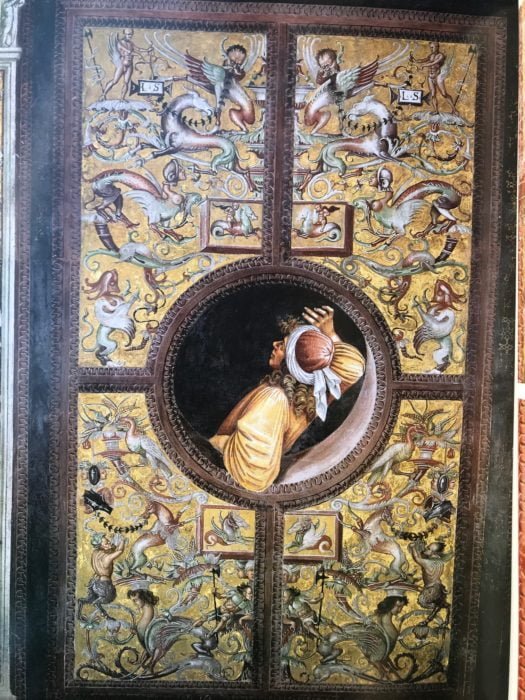 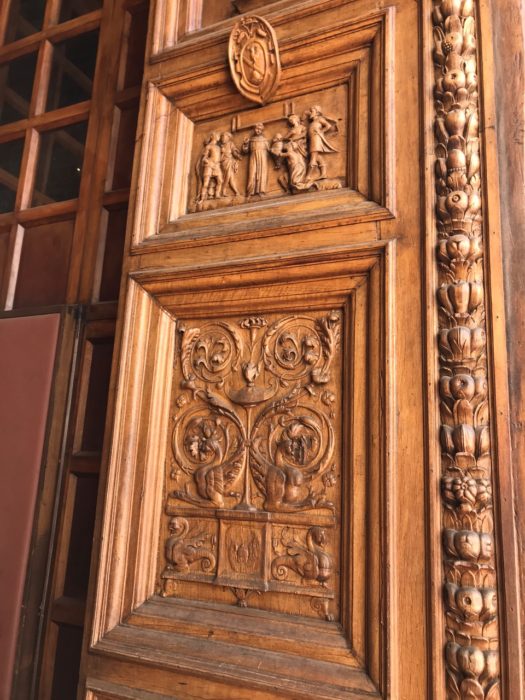 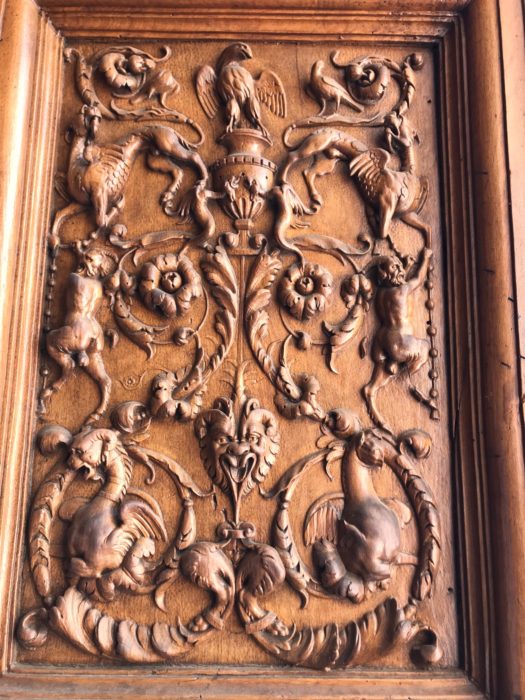 … and he takes center stage on Antonietta’s pillow, embroidered in green and white: 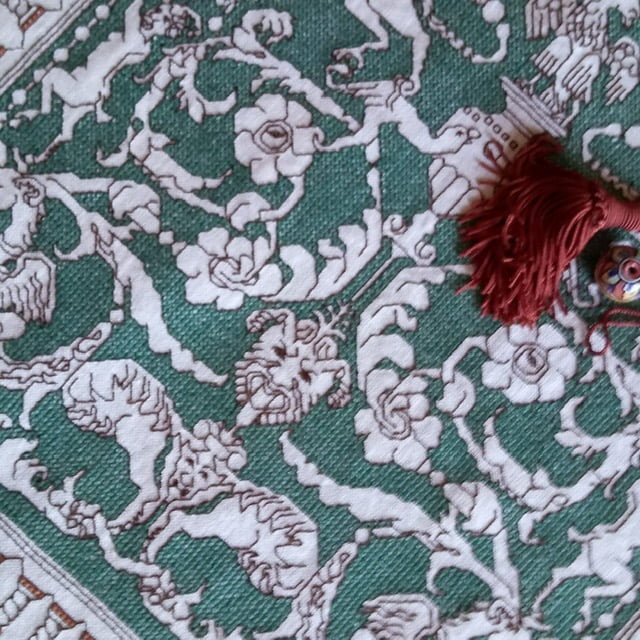 The Deruta maiolica, too, lives on in many an embroidery masterpiece…and here is one of Antonietta’s, inspired by the grottesche motif of Renaissance frescoes: 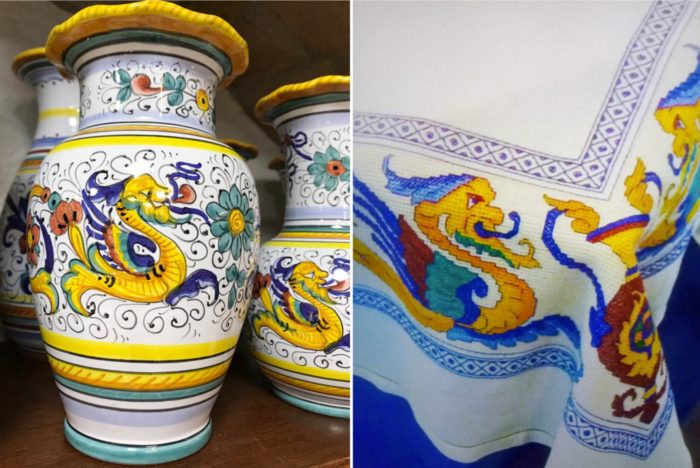 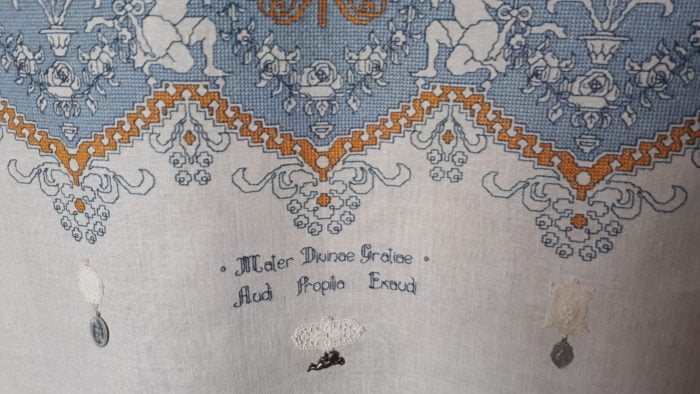 …to intervene for us all. 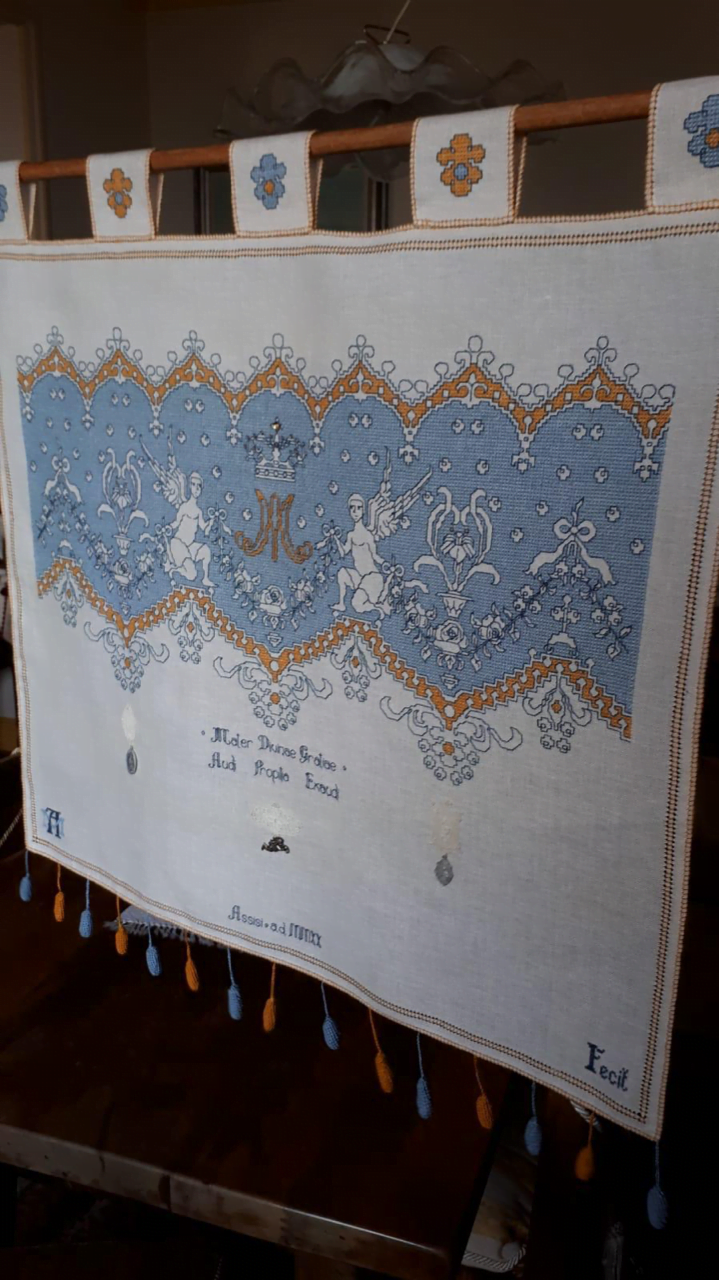 A few months after finishing the textile, Antonietta  tested positive for COVID – but recovered without complications.  In this case, that embroidered ex-voto played a dual role as  both an implication and a thanksgiving.

Antonietta told me that the medieval and Renaissance art of her region of Umbria has always been her main source of inspiration and especially in her most significant work of embroidery:  that is, the tribute to her beloved  lifetime partner, her husband Carlo Angletti, who died just over five years ago: 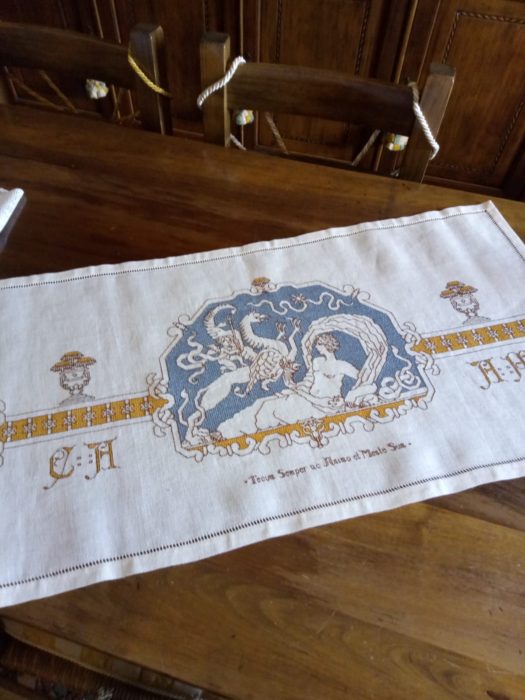 The initials of Carlo are embroidered on the lower left and her own (A.M. for Antonietta Mancinelli) are on the right.

Those initials flank an image of the birth of a river from the grottesche fresco motifs of the ceiling of the Sala dell’Udienza (“Meeting Hall”) in the Collegio del Cambio (Money-changers Guild) painted by Umbria’s greatest Renaissance painter, Perugino (1499- 1501).  You can see the ceiling splendor here- and once again, grottesche take center stage: 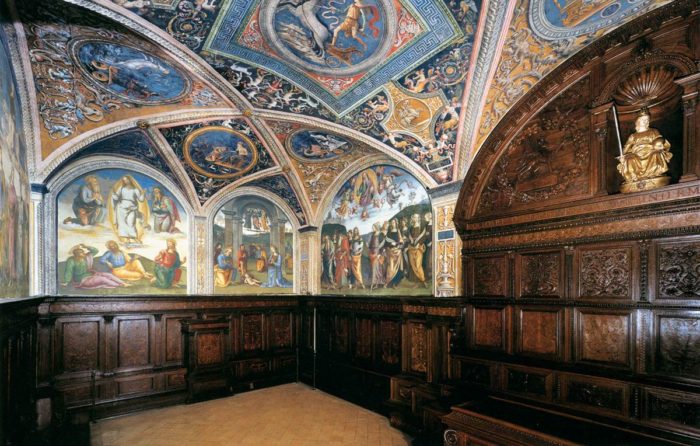 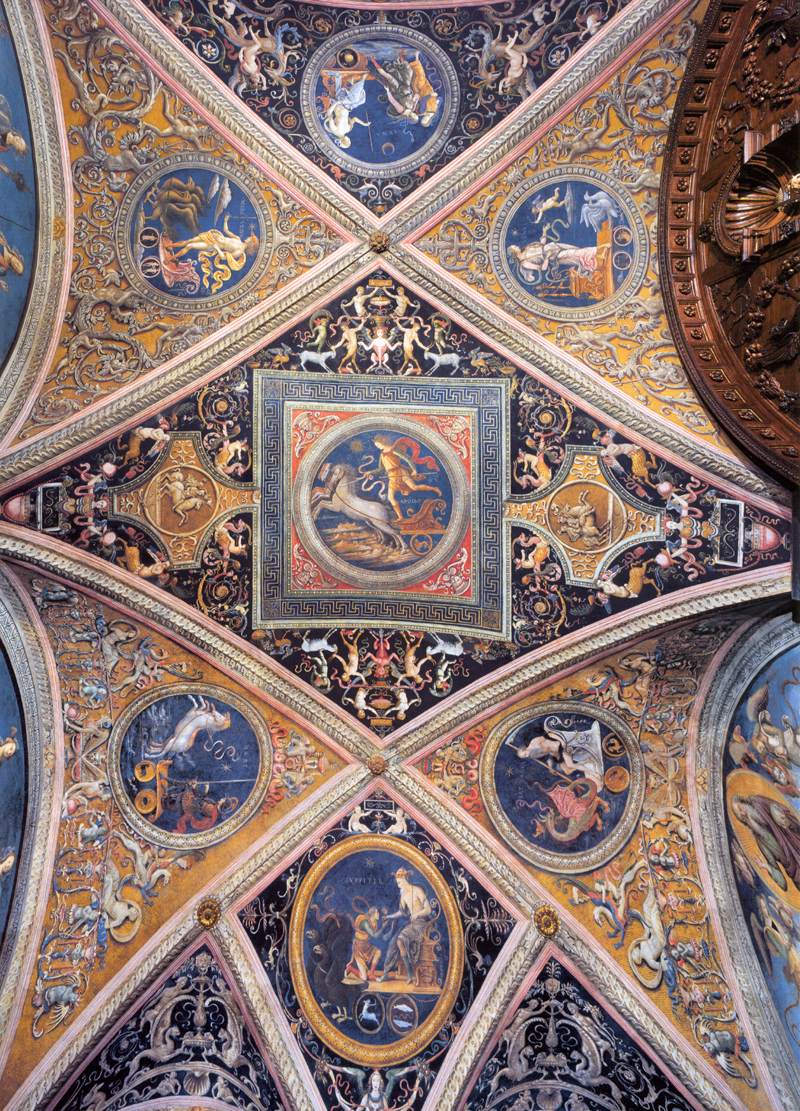 The inscription below the image from the ceiling of the Sala dell’Udienza grottesche is a quote from Cicero, “You will always be with me in my mind and soul.” 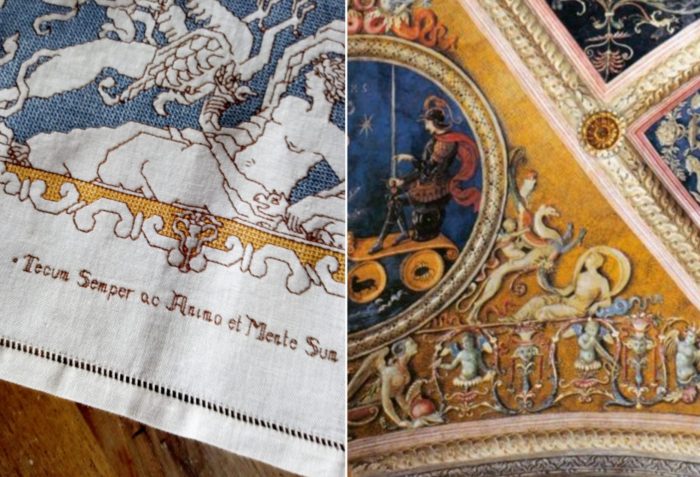 Antonietta tells me that Carletto is still with her as she continues to move that needle in and out of the linen fabrics, creating the wonders. Antonietta had hoped to show her years of embroidery works at a show – and then COVID hit.

“I had already decided the name of the exhibit, ‘Il Filo Amoroso’ (‘Thread of Love’).” Antonietta told me that the love for her Assisi, its art and history,  and traditions thread through her embroidery.

And that exhibit would have been dedicated to Carlo, for after all she said, “He was my greatest support and always the most appreciative of anything I designed or created.” 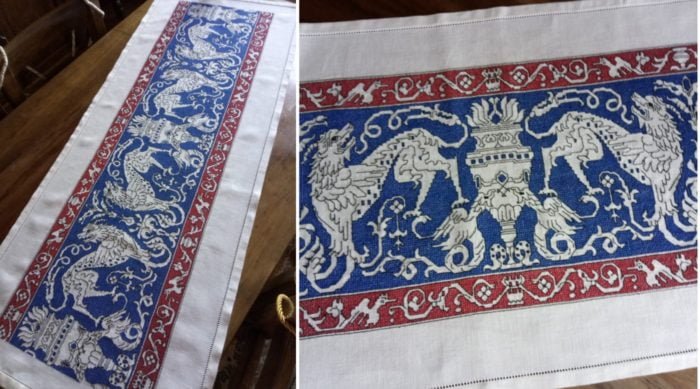 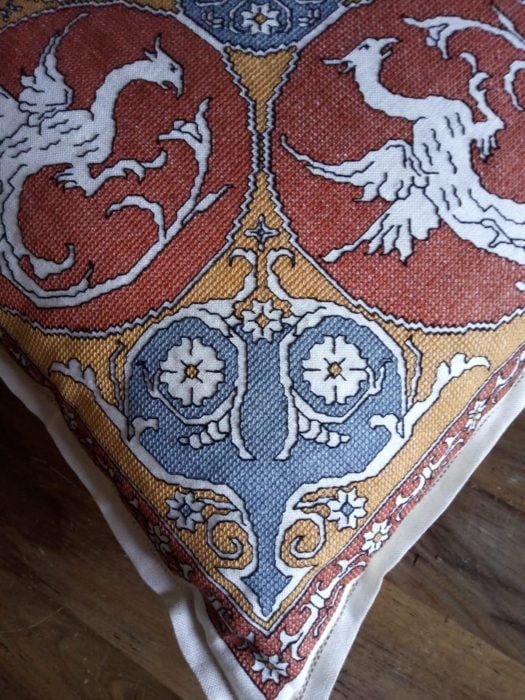 Read here about the Collegio del Cambio – and the grottesche

Read about another fine artisan of Assisi, the creator of medieval instruments

See the photos of this artisan  at work by Assisi photographer, Andrea Cova

Read about a fine artisan of Assisi, specializing in wood-carving

Click here to read about – and see! – the artisanal books and paper in Assisi